Lauri Kubuitsile's 'Anything for Money'


I'd like to welcome again, albeit belatedly, (this was meant to go up weeks ago and I forgot...) Lauri Kubuitsile. Lauri is a  smashing lady and also an award winning writer living in Botswana - however, we have managed to meet   in the flesh a few times on the occasions she has been to London and always have a riotous time! Among other prizes, last year she was shortlisted for the Caine Prize and I think that's why she was in London. 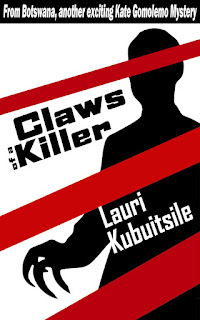 Lauri  has fifteen or more books out there - I lose count. She has written non-fic books,  books for kids, teens and books for adults, and has now taken her first foray into the self publishing world by publishing three of the books in her Kate Gomolemo Mystery series at Amazon Kindle Direct Publishing (KDP): Murder for Profit, Anything for Money and Claws of a Killer.


Lauri is giving us a peek into the third book in the series- Anything for Money. Here's the blurb:

Detective Kate Gomolemo is not sure what to make of Helen Segole’s wild allegations. She’s claiming government ministers and high-ranking civil servants are behind the cold-blooded murder of her father, but Kate wonders if Helen is not confused by the grief she’s feeling.       Against her better judgment, Kate agrees to do some investigations and suddenly she’s swept into a high-rolling, dangerous game of power, greed and corruption. The people behind it will stop at nothing to get what they want. How many people will have to die before Kate finds Goitsemang Segole’s killers? How far can greed push a person?

A rooster crowed, announcing the start of a new day. In the grey dawn, Goitsemang Segole sat on his back veranda, as he liked to do whenever he could, and looked out over the dark, ghostly shapes of the hills surrounding his home village of Shoshong. He was waiting with the hope that a new day brings. Since he was a boy he had loved waking up before the sun and waiting for its unhurried, grand arrival. He always felt a wash of excitement come over him as it peeked over the edge of the hills, flushing his small patch of the world with its warm golden light.He wondered what this new day would bring. Would he meet an old friend, long forgotten but still held dear in the recesses of his complicated mind? Would it be a sad day filled with memories of his wife, now five years dead, who he missed with an aching need? Would he have a new idea, one that he’d never thought of before that would make sense of so many things? One never knew. It was all a big, exciting gamble. And that’s what made each and every sunrise a celebration for Goitsemang.Goitsemang might have held this sunrise a little longer in the gentle folds of his heart had he known it would be his last. By the time the sun sank into the western hills, Goitsemang Segole would lie dead on the ground in front of his tidy house, his blood slowly seeping into the ancient Kgalagadi sands. But that would happen later. He still had a full day of life ahead. He reached for his cup of coffee and took the last sip as the sun finally pulled itself above the horizon. He bent down and patted his long time companion, Shumba, a Setswana mix dog, tall and lean, brindle brown in colour. “That’s it, Shumba, time to get to work.”Goitsemang headed for the back door of his house. Inside, he found his daughter Helen standing at the kitchen sink. “Good morning, Daddy,” she greeted him. “How was the sunrise today?”


--------------
Off you go to Amazon Kindle Direct - you have three mysteries by a superb writer  to choose from. perfect summer holiday reading!