On 2nd October, the 2014 Writers' Pals met at Lille Europe for the annual trip to the trenches with military historian Jeremy Banning. Five days, four nights to The Somme and Ypres this year, with a flying visit to Mons and the Boar's Head en route between the two - it was another unforgettable trip. We'd asked to walk as much as possible, thus the cemetery above became to start of a very hot walk up the 'Gloucester Road' up to Lonsdale Cemetery, Authuille. We had extraordinary weather this year!
Caroline Davies and I are collaborating on a collection of poetry inspired by the memorials of the Great War, and these trips are always such a rich source of ideas.

Back in time a few weeks, to 10th September, and we (Chris and I) were in France as well, at a village called Priez, for the unveiling of a monument to the Royal Sussex Regiment. The village is tiny - blink and you'd miss it, as they say - but 100 years ago to the day, Sussex lost its first men on the Western Front right here. It was poignant in the extreme to be with many ex-servicemen of the Sussex Regiment, who marched down the hill from the ridge on which the battle was fought, into the village - man in their eighties, seventies - veterans of the last war, many of them. 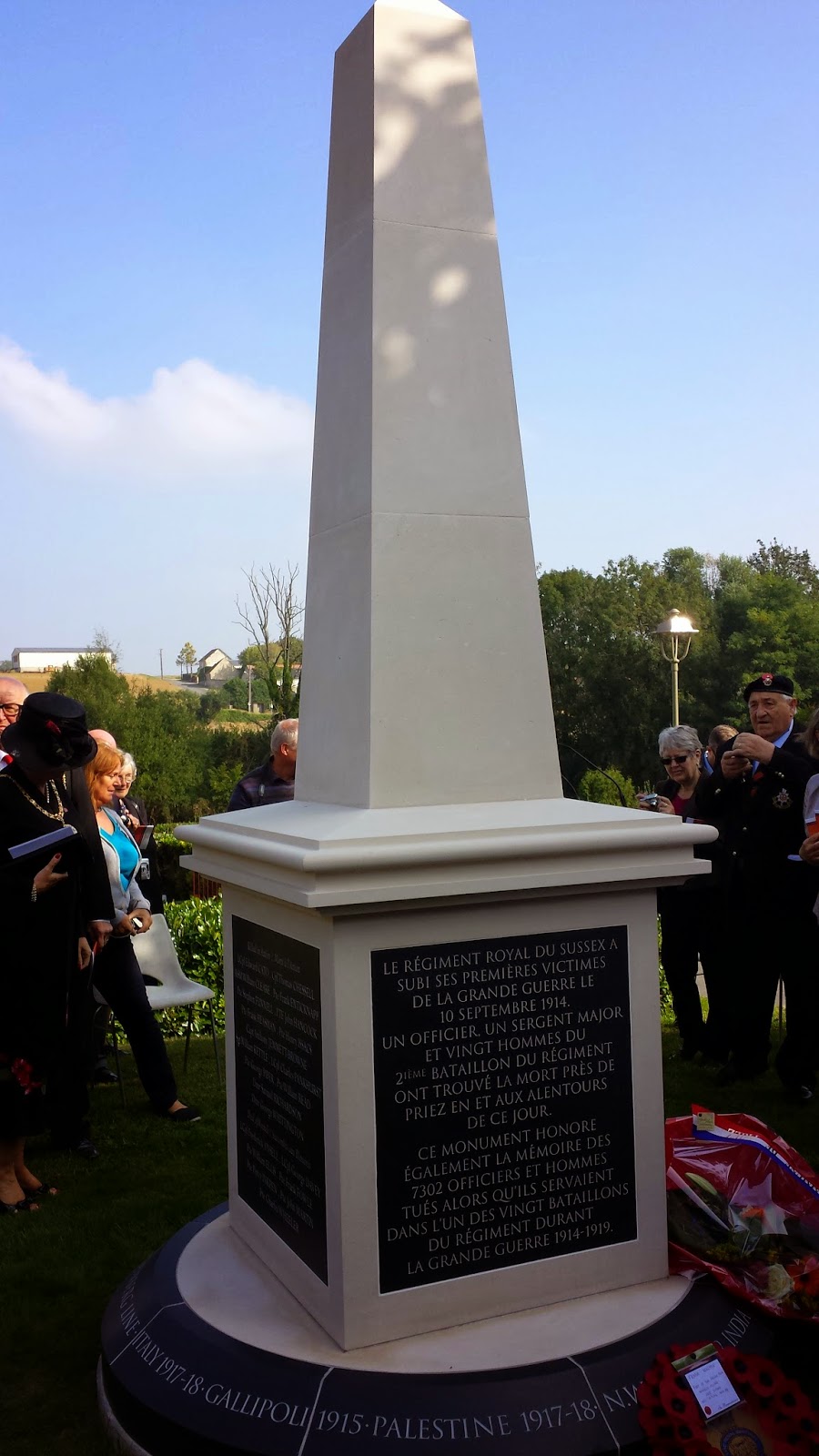 The Western Front holds many such memorials, most of which were put up after the Great War. It was a huge privilege to be there to witness this one being unveiled - and when the French band played Sussex by the Sea with great gusto, this Sussex-dweller certainly felt it.

Backwards again - my husband isn't the keenest of battlefield visitors - but on our way down to Priez, I managed to introduce him to a few places, not just British/English memorials, but Vimy Ridge (Canadians), Mametz Wood (The Welsh), the Ulster Tower (Ulstermen), Ayette Cemetery (Indian and Chinese and a German grave), McCrae's Battalion memorial (Scots), and Thiepval memorial (Commonwealth and French).

Fast forward - having enjoyed our Dieppe trip (see previous post) in August, C and I also grabbed a few days later in September, just the two of us, and went back to this terrific city - so often, I think, rushed through by visitors arriving off the ferry, on their way somewhere else. The harbour is surrounded by bistros and restaurants, there are fascinating cultural visits to make - a converted theatre holds a wonderful exhibition on the Dieppe raids, for example. Art galleries, castle, gardens - sea, beaches, plenty for the kids - what more do you want for a decent place to stay in for a while?
Not far away, the cliff-top church at Varengeville, where Claude Monet found inspiration. While C sketched in the graveyard, I took myself off on a walk down the same track Monet went all those years back. Magic.

Writing things have not taken that much of a back seat - (despite the fact I'm not meant to be writing much, opportunities keep popping up, too good to miss!)
Yes, that says 'Physics' - and it is the Physics Dept at Oxford University. Let's put this into context - I was so hopeless at it, for reasons which will become clear - that I did not even take O Level Physics. It was fine by the way, until I had the temerity to ask what electricity was and exactly how it worked. The teacher could not answer, blustered and said I didn't need to know that. Yes I did! Hence, no more working, pen down, dig in.  However. Friend and writing colleague Tania Hershman is co-editing a short story anthology to be published on the centenary of Einstein's Theory of General Relativity next year. And a group of writers have been approached to contribute stories. Thus, we all had four rather stunning (and in places completely incomprehensible) lectures, after which we will extrapolate, and mull, and produce a piece of short fiction for this initiative. Freight Publishing is producing the anthology - and there is an open call for submissions - details on Tania's blog, here: http://blog.taniahershman.com/2014/11/we-want-your-general-relativity.html


And, also with writing,  I had a wonderful wonderful week at Anam Cara Writers and Artist's retreat from 11 to 19 October. Goodness me - what a lot I learned. Led by Bernard O'Donoghue, and in the company of some stunningly good writers from the US, Ireland, UK and Switzerland, it was the sort of week that should be prescribed on the NHS and after which all would be well for years.

Other writing bits - poetry getting written, a poem due out in Confingo Magazine, and nice news about the illustrated collection Ed's Wife and Other Creatures, which has found a publisher - but  more of that when contracts are finalised.
Posted by Vanessa Gebbie at 09:47 No comments: