An interview with the author Jill Rutherford

Well,  hello there! Tis a while since I updated this thing, and SO much has been happening, it has been impossible to keep up. So a catch-up article is in the pipeline.

However. Before that, continuing in the tradition of occasional interviews with writers, I'd like to introduce you to Jill Rutherford, from Eastbourne, in Sussex. I met Jill some time back, and as writers do, we fell into conversation. I remember being fascinated by her own story - that of falling for Japan thanks to seeing a performance by a Japanese all-female theatre company - and moving there, living  and working there for seven years.

I  was lucky enough to meet up with Jill more recently, and was delighted to discover that she had almost finished the third in an extraordinary trilogy of novels set in Japan - the Secret Samurai trilogy, a fantastical story of a female samurai. (Why should men have all the fun jobs...) And  now she has indeed finished, and here they are! She has self-published all her books, and her Japanese work is beginning to be recognised by those who know - a tough journey, and I admire her sticking power.

Jill told me that her novels have been included recently on a list of Savvy Tokyo's 7 must-reads set in Japan.  http://savvytokyo.com/7-must-read-japan-related-books-female-authors/


They said she is: "a writer with great insight into Japanese culture and the power to deliver unique plots and marvellous characters"


- well that's some accolade, coming from a Japanese publication!

So, not to be outdone - we had another natter here.


Me: Come in, sit down, have a cuppa!  I love the title of your latest novel, the final one of the Secret Samurai trilogy - so tell us a little about Secret Samurai?
Jill:  It’s not the usual kind of samurai book. The story is a time-travel adventure involving two women who become samurai and the two men they fall in love with and the women’s influence upon them. 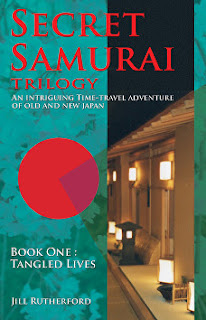 The first is a modern English woman who moves in and out of the mind of a samurai fighting in the civil war of the 1860’s which dragged Japan into the modern world. She lives two lives in parallel (modern and old Japan). 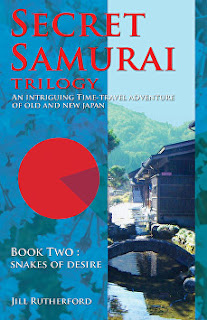 The second is an aristocratic woman of the 1860’s who is forced to disguise herself as a samurai in order to survive the war. Living as a samurai gives her influence and respect – things she has never experienced as a woman of her time. She becomes intoxicated with the power of it and this takes her down unprecedented paths.
The historically accurate story revolves around the war and politics of the time, and they play an important part, but it is more about the relationships of the four main characters, their development, ambitions and perceptions and how their lives change.

Me: They sound absolutely extraordinary! What an imagination you must have. Tell me a little about your writing process, and where the books came from. 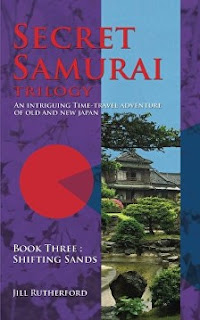 Jill:  It all took three and a half years to write and it proved to be a difficult story from the beginning. I thought I knew enough Japanese history to, with the help of a few history books, write the story. I soon found out that this period is the most complex in the history of Japan. Nothing stayed the same for long, factions changed, people altered their names, it was a convoluted war that lasted for fourteen years. As I didn’t want my books to be – or read – like history books, I had to simplify it. That was the hardest part, how to keep the history easy to follow and not bog down the reader. It took a lot of work as I wrote and re-wrote, paring it down each time. Finding ways round obstacles. I hope my readers will be totally unaware of this. If not, then I haven’t done my job.
As to why I wrote this particular story. It started about four years ago when I had to have an operation. While I was at home recovering, groggy from the anaesthetic and pain killers, I closed my eyes one afternoon and suddenly, the story of Secret Samurai came into my mind. I went to my computer and, muzzy as I was, I started to write. The story got bigger and bolder and more exciting until it spread over three books. It was inspiring to write about these four special characters, especially the two samurai women and the way they influenced others. The story developed as I wrote, one thing led to another in a natural way. An organic process.

Me:  And the books are published and making their way into the world?
Jill.  Indeed - and I’ve had some very positive results. Now the trilogy is finished and people can read the whole story, I’ve been picked up by a couple of magazines in Japan. Recently, an author I don’t know approached me via social media saying she wanted to include the trilogy in an article she was doing for Savvy Tokyo Magazine, entitled, “7 Must Read Japan-Related Books by Female Authors”.
http://savvytokyo.com/7-must-read-japan-related-books-female-authors/
That exposure has made a huge difference. On the back of that, another magazine, Love Japan, is using my trilogy as one of the prizes for a writing competition they are doing.

Me: Fantastic. Congratulations. When did you first get interested in Japan?
Jill: When I saw a programme on BBC 2 in 1994 about a unique and rather strange theatre company in Japan. It’s called the Takarazuka Review Company and is an all female company with over 420 performers who play both the male and female parts on stage. (Off stage, the company is almost exclusively male run).

It’s full of fun, glitz, glamour, sequins, feathers – a real throw back to old Hollywood Movies and the Follies-Bergére . But also, it has its serious side and the Japanese history plays they perform are exquisite, many with sublime music and singing. A real gem of Japan hidden away from most foreigners.

I went to Japan to see the theatre and much to my surprise (for I wasn’t interested in Japanese culture at that time) I fell instantly in love with the country, the people and the culture. Many holidays later, I wanted to live there, to experience, ‘the real Japan’. Alas, I lacked a university degree which is requisite to obtaining a working visa; therefore I couldn’t get a job. So I went for a year’s holiday and didn’t come home for seven. I found a way to open my own English school and prospered.
Me: I think that's something many people would love to do, but never do. Tell us about the book  you wrote about your time there? 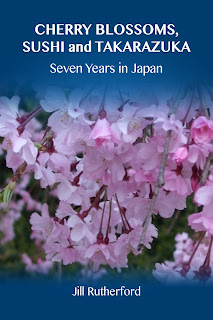 Jill:  Yes, I wrote, Cherry Blossoms, Sushi and Takarazuka, Seven Years in Japan about eighteen months after my return to the UK. I realised I had a story to tell and an irresistible urge to tell it. So, I wrote it all down and haven’t stopped writing since. The first draft flew off my keyboard. Then, when I went back and read it through, I realised it needed a re-write. It took eighteen months of hard work, but I got there in the end. I now know that all first drafts are just that. First drafts. You need to go back and hone and polish over and over until you have the best you can do.
Me:  What would you say to new writers starting out?
Jill.  There’s a misconception that writing a book is easy. I heard of another writer who recently met a scientist at a party. He asked her what she did and on hearing that she was a novelist, he replied, “When I retire, I’m going to write a book”. She retorted, “And when I retire I’m going to write a paper on quantum physics.” Good for her. It’s hard to write a book. I’d say you have to write, write and write. Read, read and read. Go on every writing course you can. Listen, learn and practice. Subscribe to a writing magazine. Join a writing group.  Learn from the books you read, the good points and the bad. How they use dialogue, descriptions, start and end their stories. Look at the structure and start to analyse stories. Practice it yourself until you find your own style. Never stop writing even if it is only a few minutes a day. Always improve on what you have written. I saw a play once about F. Scott Fitzgerald. Someone asked him what he was doing and he replied, “I’m working on a sentence”. That struck me as funny then, but now I write my own novels, I realise how pertinent that comment is.

Me:  Great advice. Do you have anything else in the pipeline – anything more about Japan? Or will you go onto something completely different?
Jill.   I’ll go back to the book I was writing before all this! It’s a family story set around a mystery. It starts at the turn of the 20th century in the Welsh Mining Valleys. It needs a complete re-write, but at least the story is there.
I’m also playing with the idea of a mystery series, but it’s very early days yet.
I’ve written several short stories about Japan which have won competitions including the Charles Dickens’ Fellowship Short Story Prize for my take on A Tale of Two Cities. Mine were Tokyo and London. Plus first prize and also runner up for Eastbourne Writes Festival 2012.
Me.  Congratulations. Are these published?
Jill:  Yes, in a book of short stories entitled, The Day After I Won the Lottery . . . and Other Short Stories. 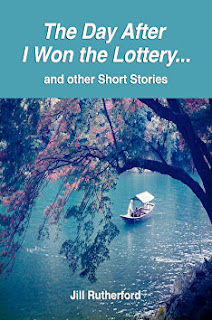 Me. I do love your covers. They are very eye-catching. So - tell us a little about you, apart from ‘Jill the writer’, who else is she?
Jill.  That’s a difficult one. How you perceive yourself is often so different from how others see you.
I hope I am honest, straightforward, engaging, humorous and hard working, as those things are important to me, but I don’t know if my friends would agree ! 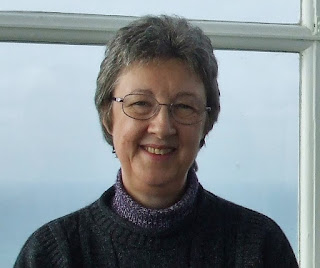 I try to remain positive in this increasingly spiralling world. I follow world affairs – via the BBC – where hopefully, the news is not faked ! I still love the Takarazuka Theatre.
I wish I could master social media and be the Twitter and Facebook Queen with ‘friends’ and tweets everywhere. Alas, it is not my forte and I fear I am being left behind. I do try, but feel it’s a big failing of mine. Another generations’ adventure. So, if I’ve any fans out there, please forgive my strained efforts.
I like to drink red wine, eat out, walk my dog, spend time with friends, go to writing groups. I’d like to be a best-selling author, but then, wouldn’t we all !

Me: Thank you Jill. It's been a pleasure to natter, and I wish you so much good luck with all your books.

So - if you are a fan of Japan, and would love to try these hugely imaginative stories about the life and loves of a female samurai - her books can be found in the usual places. Don't forget - independent bookshops will always order books for you!