OOOPS!
It would seem a long time since I did an update. So, an apology to my reader, and an even bigger one to the lovely Adnan Mahmutovic whose blog tour I have completely mucked up… but I am hoping he will visit very soon to talk about ‘writing other’ in his great novel, Thinner Than A Hair (Cinnamon Press)

working all hours on the novel, adding new passages, deleting others, going through with a toothcomb and reducing wordcount by about 5k, and beginning a sentence by sentence out-loud read through for sound and rhythm.
This stay was funded by my ACE grant, for which I am eternally grateful.
Work continued when I got back, until I had the manuscript as good as I could get it for the moment, ready to go to my mentor Maggie Gee for her final read right through, which will be happening as we speak. I am due to meet her on 21st, or thereabouts, to hear her opinions of all the work done over the last three/four months. 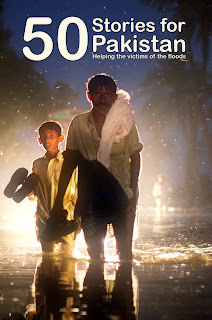 Those who know about ‘100 Stories for Haiti’ will be familiar with the lovely Greg McQueen and his initiative to pull writers together to produce an anthology of little stories with big hearts to help raise funds for the Red Cross. So far, it has raised over £4000.00, and is still selling well. If you haven’t got a copy… why not?!
Now he’s doing another… ‘50 Stories for Pakistan’, again, an anthology to raise funds for the Red Cross as they battle against the odds to help the millions who have lost homes, family members, in the floods.
The cover has been finalized. An image by photographer Daniel Berehulak, which Greg saw recently… and owned by Getty Images. They have generously said it can be used by Greg for this marvellous initiative.
He emailed me yesterday and asked if I’d consider writing the introduction to this anthology. That’s such an honour, and of course, I didn’t need to think about it. Greg sent me the cover image, and I wrote the intro there and then, from the heart.
Here’s the info for any writers who would like to submit work, on Greg’s own publishing website, Big Bad Media: (They will be publishing the book!)

SMALL WONDER FESTIVAL – Charleston, East Sussex 22 – 26 September
Having been a faithful attendee for the last four years, having enjoyed workshops with luminaries such as James Lasdun and Esther Freud, and listened to some fairly amazing writers expounding on their work – William Trevor, Colm Toibin, Beryl Bainbridge, A L kennedy, Janice Galloway, Helen Dunmore, Yiyun Li… and many many more, I am so looking forward to speaking there myself, on Friday 24th!
The super-talented Tania Hershman and I are reading and talking about flash fiction – a first for Small Wonder. Very exciting! Here’s the detail.
You can read the programme for yourself, but I would point out the appearance of Adam Marek on Sunday 26th - a stunning writer, one of my favourites, and a most generous contributor to Short Circuit – Guide to the Art of the Short Story.

MORE ABOUT THE NOVEL
The last few months have been fairly frantic, working hard to finish the novel – and I hope it is almost there. I keep waking up with thoughts such as, ‘I could just add this, or that, or that…’ and suspect there is no end to that process.

I am coming towards the end of my funding from the Arts Council – the manuscript has now been sent to Maggie Gee for a final full read-through of the revised manuscript, with many many tweaks and deeper revisions suggested in the course of my mentoring by this generous writer.
I have learned such a lot. Part of the grant requirement is that the recipient keeps a close record of learning as a result of the activity – and that is a long, long essay! I will be sharing most of it here as and when.
Anyway, Maggie is due to give me feedback on Tuesday 21st, I hope – and I will find out at that point just how close it is to actually being finished.
But I also know, I think, what I would like to tackle next, in terms of a longer work… and it has come out of a scene in this novel, so we’ll see.

Which brings me to RECYCLING.
No, not milk containers and newspapers, but work. Someone asked the question on a forum the other day, something like, ‘Is it Ok to reuse your own work…’ – and I remember wondering that same thing not so long back.
But the novel itself has come about because of one single chapter, which as a short story, won a decent prize. The 3000k story set the tone, the themes, the setting, and introduced a type of character…for a whole novel.
That short story came out of a single scene, c.1100wds, which as a much shorter story, won a small comp a few years beforehand. I wove a more complex story round a scene…
That scene came out of a 450 wd flash piece written in a timed exercise on a writing forum. I worked on that flash, found the characters fascinating enough to concentrate on more.
We create, we reuse, we expand, we change about, we make some of our words work very hard for us. Other words, we let them go after a single outing, and enjoy that as well. At least, that’s how I work!


POETRY
I am still writing poetry. I am still reading poetry. I am still trying to fathom what it is, exactly. Some poetry moves me, makes me want to read again, and again. It holds more than the words. It makes me want to write. Some feels clever-clever and ‘exclusive’…
And extraordinarily enough, even though I have asked some very excellent people what makes a ‘good poem’ as opposed to a ‘poor poem’, the answers I get are very non-committal: ‘You have to work that out for yourself…’ being the best.
Hmm. Anyone else prepared to stick their necks out to let me know what a good poem actually IS? A definition in a line or two, please.
See, if I am told I have to work it out for myself, all that means is that I sort out what I like to read, as opposed to what I don’t like. Doesn’t mean it is GOOD, does it? And I’m struck by the vitriol with which the poetry community seems to treat its members… ‘Mine’s better than yours and x is a wally’ seems to rule. But if no one will TELL us what is ‘better’ then all I am left with is a cohort of writers who think they write best because they think they write best and their mates agree because they write best as well.
Anyway. In an attempt to carry on writing what is no doubt not-good – I am joining Pascale Petit at Tate Modern in October, for a six week course, finding poems from art. And I’m off to Anam Cara again in December, and may well concentrate on the poems that bob up during that six weeks….making a pamphlet! Wheee!! I shall call it “Fine Art. If that’s OK with you…”

FISH POETRY
Poetry Contest Summary FOR 2011
Closing date: 30 March 2011
Results: 30 April 2011
Judge: Brian Turner
Poetry Contest Prizes:
A First Prize of €1,000 to the winner plus publication in the 2011 Fish Anthology.
The best ten poems will be published in the 2011 Anthology and each poet will receive five copies of the Anthology.
All winning poets will be invited to the launch of the 2011 Fish Anthology. This will take place during the West Cork Literary Festival in July 2011.

For full details off all these competitions, the rules and entry guidelines, see FISH website.


ASHAM AWARD for new women writers *DEADLINE 30 Sept
ASHAM AWARD 2010
For the first time since the Asham Award began in 1996, there will be a theme to the competition. Entrants are being invited to write a ghost story (which can be set in the past or the present) or let their imaginations run really wild, and go Gothic.   Asham 2010 sees the start of our partnership with Virago Press, and with one of our greatest storytellers, Sarah Waters, among the judges, we’ve set the mood with a few lines from her latest novel The Little Stranger.
Sarah will be joined by Lennie Goodings, publisher of Virago and by novelist and short story writer Polly Samson.Polly will also contribute to the anthology, along with Naomi Alderman, who won third prize in the 2004 Asham Award and the Orange Award for New Writers with her first novel, Disobedience. Fellow contributors are Kate Clanchy, who won the 2009 BBC National Short Story Award and Zimbabwean writer Petina Gappah, winner of the 2009 Guardian First Book Award.
For full details see the ASHAM website.


‘Spread the Word’, London – Win £100 for your flash fiction -
Spread the Word has teamed up with StorySlam Live for their next PenPals networking and showcase event for young writers aged 18 – 30. Wednesday 6 October, 6:30pm – 9pm | Bethnal Green Working Men's Club | £7
Come and hear fresh new storytelling and share your words with other young writers. What do you have to say about the city you live in? What does this sprawling metropolis mean to you? Bring along your story, max length five minutes, on the theme of London.
Eight entrants will be chosen at random to read in front of a panel of judges, their favourite will receive a prize of £100


Inkspill Magazine
Inkspill is holding its first Short Story Competition with a total of £100 in cash prizes to give away. There is a reduced early entry fee if you submit your entry before 1st October! The three winning entries will be published in an upcoming issue of the magazine, as well as earning some cash.
However, ALL entries will receive a short critique, so even if you don't win, you'll get a little something.
Since they're a small press publication, writers have a much better chance of winning. To raise the £100 needed for prizes, Inkspill Magazine only needs 20-34 entries (20 at £5 a pop, and 34 at the reduced early entry fee of £3). If there are more entries than that, the prize money will increase!

So they're offering:
- a reduced early entry fee
- good chance of winning some cash
- increase in prize fund with enough entries
- a free critique with every story
What more could you want?
Please feel free to help spread the word, and check out the INKSPILL website for more details.