‘Shall we draw a house?’ Something about creativity. 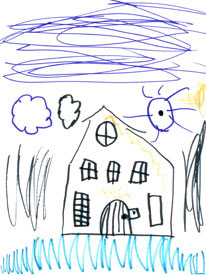 Those who have read the post below, added here back in April after a brilliant workshop in Ireland, will know the significance of ‘Shall we draw a house?’ The moment when I revisited for the first time, a formative event - a rainy day when my mother set me and two friends, all of us aged three or four, the task of drawing a house. And the best was to win a biscuit. The others drew normal houses, rectangles with a roof, windows, door, chimney, garden path. Fences.  I, on the other hand, drew an enormous edifice, so big it had to go round to the other side of the paper. It had hundreds of chimneys, so many rooms the windows overlapped. It has doors everywhere, even at first floor level and in the roof.  It was all the colours I could get my hands on. I remember scrabbling across the table for the red, the blue, the yellow.
Judgement time, and I saw disappointment all over my mother’s face. ‘That’s not a house, she said, and awarded the biscuit to a drawing that approximated what she had in her head.

A lightbulb moment, that workshop, and realising that I was affected so deeply by that occurrence, one I hadn’t so much as thought about for decades. My house was a good house. So were the others. The mistake was/is in having my house compared with the others,  and Mum expecting someone else’s creation to mirror her own idea of what it should be. And showing it.

If your 'house' happens to be what 'Mummy' wants, (for 'Mummy' read any of the following: publishers, agents, editors, competition judges, other writers, friends, well-meaning or not, family, well-meaning or not) that is terrific. If not, and you are a fragile three-year old somewhere inside, you are walking into difficult territory. Territory you will have to learn to manage.

Have a think. Are you still ‘drawing the house in your mother’s head...’? Or have you freed up, and are now happily drawing your own, what you want to draw?