Storm Warning
Is here! My copies have arrived for the private launch party next weekend, and over half are sold already. Thank heavens – nowt worse than an old fart of a writer with old cardboard boxes full of unsold books in the garage.
I have organised absolutely nothing for the book – apart from a lovely offer of a blog visit from a writing friend – yes please! And any other offers?
It must be quite strong stuff – well, it is about war, and echoes thereof… a nice lady neighbour told me she started it and had to stop, it was ‘too strong’. Ah. Well, it is not called ‘Storm Warning’ for nothing. It is meant to make you stop and think. Er… not just stop…oh well. You win some you lose some.


There will be a public launch on 23rd November at The Nightingale Theatre,
Brighton, courtesy of New Writing South, at 6.30 pm flyer here:

I’m also sharing a launch in Ireland on 6th December at Anam Cara Writers and Artists’s Retreat with Sue Guiney and her marvellous new novel ‘A Clash of Innocents’.

Where to start? Firstly, congrats to Alison Fisher, who has won the 2010 Bridport Short Story comp. £5000 for a short story, ain’t bad. I saw Alison at Small Wonder Festival a month ago – she turned round from the row in front, and whispered, ‘Do you remember me? I came to one of your workshops…I’ve just had some lovely news…’
Nah – I’m not saying it was the workshop that made her win it. But it might have helped a little on the way, ‘Writing for Competitions’ it was called…Must run that one again and charge a mint and a half. That was the two weekend workshops the organisers managed never to pay me for - a couple of years back… see other blog for gory details. (!!) Nice to know something good happened…
And congrats too to Claudia Abbott (Claudia Boers) for her finalist place, and look forward to reading these stories in the 2010 anthology.
Congrats too to those writing friends, colleagues and so forth including facebook mates, who were short-listed for story, poetry or flash. Carys Davies, Joyce Russell, Jon Pinnock, Sheenagh Pugh, Wena Poon, Valerie O’Riordan, and I’m sure there are other lovely writers I’ve missed out.

It’s all down to hard work, much of this… hats off to all. All the info is here

Judging Flashes
I am one of the judges for a flash challenge … quite a big one – its still under way so I wont post links. It is extraordinary to see how many pieces come in at 999 words (limit is 1000), and how many are seemingly unedited for bagginess. Makes me realise yet again just how difficult writing a good flash actually is.


Article on Flash Fiction at Essential Writers
I have been discussing flash fiction in a series of Q and As for the lovely site Essential Writers – the result is here: What is it, how did I discover it, how to write it, where to publish, and lots more.

"A Clash of Innocents" by Sue Guiney 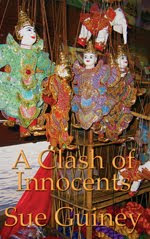 The husband and self went to a marvellous book lunch, at Asia House HERE to celebrate and wish God Speed to A Clash of Innocents by writing friend Sue Guiney. I have the book all signed and waiting on top of the pile. But all indications are that it is marvellous and vibrant read, thought-provoking too. You can read about it on the blog tour discussions all linked on Sue's blog HERE, and on the publisher's website. Ward Wood HERE.


Teaching at Exeter and Ipswich
Early October saw me up in Ipswich at the rather gorgeous University Campus Suffolk, teaching a large gang of terrific creative writers. The workshop focussed on character, and we had great fun as fresh and interesting characters rose up through the fog to take us over. Marvellous stuff.
And I visited Exeter Writers a few weeks later, my old stamping ground, as I was brought up nearby and went to University there…we had a fab afternoon’s workshop, again on character but with a different slant, over three hours. Exeter Writers is a focussed and hardworking group, including many well-published and prizewinning writers. They run a short story competition – and having worked with them for the afternoon, I reckon they will be very tough but fair judges.
Exeter Writers Short Story Competition HERE:

Novel Update
The manuscript has been sent to my agent, finally. Its had a long gestation and birthing process, this one – light and dark – some bits have won competitions, bits have been written between late 2006 and late 2010 in Ireland (mainly), England (with difficulty) Scotland and Wales, one bit had an unfortunate experience, some bits make me laugh, others make me cry. I still shake my head at the brain that produced some of this work, forgetting it is mine… The whole is still a matter of bemusement – the opening line (which then led me to the themes, the title, characters, and some storylines) appeared over a cup of machine coffee in a garage, while reading The Daily Mail (never!) waiting for my car to be serviced. Such a romantic process, writing.
In the end, its been a fascinating old journey. It has been an enormous privilege to be awarded an Arts Council grant to work with the gloriously clever and generous Maggie Gee to polish and finish the work. I now wait to see what my agent thinks, fingers crossed – I feel it is now time to get on with the next project. Although it is only sensible to expect to have to do more on this one, if ….


Reading at Bristol Blackwells
On 24th November, 6 pm to 8 pm, with Tania Hershman, Anna Britten, Margot Taylor and others. There is also an open mike slot afterwards… rollup! 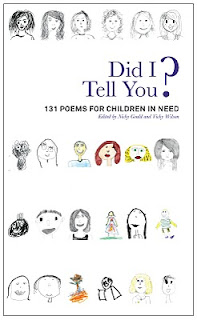 "Did I Tell You..? 131 Poems for Children In Need" is here:
Poems from all sorts. From somewhat brilliant ones like Andrew Motion and Catherine Smith and Clare Best and Sarah Salway, to a very short one from me, which starts with the immortal line:
“There’s a chest she had. ‘Breasts’ they were called…”! Lock me up someone. (No – that’s not part of the line….)


And 50 Stories for Pakistan is also here.
All profits will go to helping the foood victims of Pakistan. From the same big hearted editor who put together 100 Stories for Haiti. Never heard of that one? HERE. Go Get Em.

SMALL WONDER FESTIVAL and a small bit of poetry news

SMALL WONDER FESTIVAL
The Small Wonder festival celebrating the short story is the literary festival William Trevor loved: “The best literary festival I have ever attended,’ he said. He was there a few years ago – this year, there were others, and it was marvellous stuff. Highlights for me included Adam Marek’s and David Vann’s event, with readings of two of the shortlisted stories for the Sunday Times Short Story Competition. And two talks, one on D H Lawrence, by David Constantine, and one on J G Ballard. And A S Byatt in conversation, and and and… of course, being up there myself with my lovely talented friend Tania Hershman. Here’s some pics taken by Axel Hesslenberg, official photographer of the event. 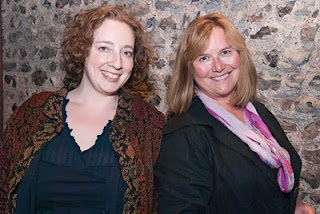 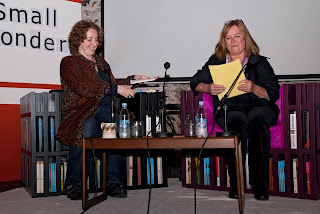 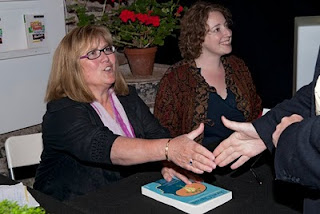 Poetry news:
I sent a few poems to Bridport this year. Why? Dunno. I like to support, I think it is a smashing competition and have great respect for it, the organisers, the readers, who all work so very hard, to raise money for the Bridport Arts Centre. I didn’t win anything, not unsurprising – but I did, joy of joys, get two poems onto the shortlist. Now that shortlist is anything but short, but given the thousands of entries, (last year, over 8000 poems) there must be something OK with them. Trouble is – I have NO idea why they made it. Or what was wrong with the ones that didn’t…

Novel news:
Maggie and I met last Tuesday - I'm unhappy with the ending of the novel, and she agrees. So... Im still working on it. Plod, plod plod...
Posted by Vanessa Gebbie at 10:31 5 comments: