'Year of Night' by Kate Beswick

I am delighted to welcome the very talented Kate Beswick to my 'umble blog. I met Kate while working on 'The Coward's Tale' at Anam Cara Writers and Artists' Retreat in Ireland, and we have kept in touch since. But more importantly, in the evenings while we were there, we shared snippets of our work.
I know Kate does not believe me, but I was blown away, as the cliche goes, by her reading (well, she is an actress, and so the readings were just perfect) but more importantly, the story - the descriptions,  the characters, the prose - stayed with me. St Petersburg, Paris, not now, but decades ago... so well evoked that all who were listening agreed it was as if we were there, not in West Cork.
I now have a copy of that novel, Year of Night. Kate has published it herself, having had so many knock-backs, I am astounded. So, folks, I am rather pleased she is here to talk about the book, what's behind it, and her self-publishing experience.

I am particularly interested in self-publishing. We all hear such negative reports, about the standard of self-pubbed writing out there. However, if you are disheartened about the lack of standards among self-published books, 'Year of Night' will surely put your heart back where it belongs. 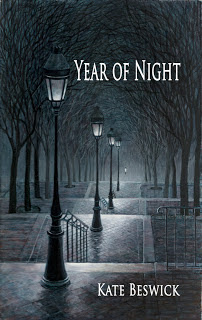 Kate: Life is what happens when you’re making other plans as they say. This can be true of novels as well.

I was working on a project inspired by ‘Poem Without a Hero’ by Anna Akhmatova. The poem has always haunted me creatively, and in the Anna Akhmatova museum in St Petersburg I have been fascinated by the room devoted to it with  the huge wall mural of portraits.
I began to research the  period, the Silver Age and after. Most of the people mentioned, I discovered, had emigrated to Europe, most of them to Paris where they struggled to keep their lives and culture alive in the face of poverty, unemployment and ultimately, the Second World War.
The temptation with research is to wander off the main road and stroll through the lanes and byways of the period, admiring the view and squirreling  away souvenir images. Akhmatova,  her friends, their friends and their relatives. Artists,  writers, philosophers, their cousins, their lovers. It  was  like going through the looking glass. Oh, I was definitely going to write this project. Sometime soon. Then I read a short paragraph in a memoir, a description of how the author went with other emigrees to greet Akhmatova’s train when after 25 years she was finally allowed out of Russia. She was not allowed to leave the train until she arrived in London, so when the train stopped in Paris, all the remaining emigrees went to the station and were allowed on the train  for a few minutes to greet her. I think it was at this point that my muse (a word one can only use without blushing on the Internet) suddenly spoke up and said ‘Enough  with the research. Sit down and write something.’ So there I was, with a young girl at a railway station and a period of history that had disappeared.  I started writing.
I did go on reading - as you can see from the  bibliography! I also spent a lot of time in Paris. I went to every place mentioned in memoirs of the period: every house, cafe, church, cemetery. Some of these places no longer exist, some are changed beyond recognition. Still, I walked from place to place as they did, from Billancourt  (where many ex-officers found employment at Renault) to Monptarnasse, around Auteuil, Clamart, Meudon, Sevres.  I went to small houses, blocks of flats, parks, bookshops, cafes. Nothing was left, there were no memorials. Still, a life began to  take shape. I read poetry, letters, short stories, memoirs. I looked at a lot of photographs. I felt I was living in a parallel dimension. It was very addictive.
And my girl at the railway station? I went backwards and forwards telling myself stories of her life. The book really evolved as I developed characters and relationships. I was writing about courage and survival with honour in a web of social and political chaos. I have never enjoyed writing anything so much in my life.
I finished the book. It was  absolutely dreadful. It lumbered along, on third person, filled with information that led nowhere, like a cart with its wheels stuck in the mud. It  even bored me.
But I couldn't give it up. I still believed I had a story to tell  and I couldn’t bury it because it wasn’t dead.There was life in  my notes if not in my novel Then I had the click: the notes were in  first person. I threw out my ‘finished’ draft and started again, first person. The story  suddenly came together, moved forward, spoke fluent fiction. The only thing that was unchanged was the girl in the railway station.  It’s still a story of survival but  I hope it happens on the page, moment by moment, like a good performance.

V: I know the novel has had a history - can you tell us something about that?

Kate: OK The book was written, rewritten  and rewritten and I knew I had done the best I could do. I sent it out. Eighty people rejected it. Strangely, this did not upset me. I believed in  the book and I knew that somewhere there were other people who  would feel the same. I have to say that every writer or serious reader who read the book liked it. Some of them were friends, but a lot of them weren’t and I kept reminding myself of that. People who  read things liked it, people who buy things didn’t.No criticism. The criteria, I learned, are different.While the  book  was being rejected, I began another book, ‘Happy Happy’ a story of a family in 1950‘s Hollywood.

Then I got ill. Let’s not go there. I wrote nothing for  a year. Then I spent a year slowly getting myself back together. I managed a dreadful story (about getting ill I’m afraid) and one chapter of ‘Happy Happy.’

V: People will be very interested in the fact that you have decided to publish this way. What was the thought process?

Kate: Probably due to Divine Guidance, I went to a Guardian workshop on self publishing. It was in a chic location I couldn’t afford to enter otherwise, there was lots of coffee and baked goods, and the leader was slim,attractive and wore a chic black  trouser suit (these things matter to me.) She smiled a lot, and the atmosphere was generally upbeat. Fueled by caffeine, I saw myself in the part  immediately. I already had a black trouser suit. Done.

V: How have you found the experience?

Kate: Self-Publishing, I discovered is an exciting, empowering  and time consuming experience. It’s great to  be in control but being  in control means you have to know all about everything.  As a careless, ‘creative’ person whose previous experience was far from literary, and who can’ t even type,  I had everything to learn. Proof reading, copy editing, layout, cover design, all of it. There is pressure, there are decisions to be made, there are deadlines.  Things go  wrong, and whatever goes wrong, it’s you, the self-publisher who is responsible. There is a small amount of support, but in truth no one else will  ever care as much as you  do. I worked obsessively to learn how these things are done and  how best to do them so that they accurately reflected the theme and style of the book. Because I hadn’t looked at the book in a long time it was easier in a way: I approached  the manuscript from an objective distance which made the errors stand out. It  was at times very scary. At other times I watched myself in surprise, like a mother whose idiot child suddenly recites a poem nicely on Parents Day. On the whole I thoroughly enjoyed the process of moulding  the product of my imagination into an artifact. The beautiful cover was designed for me by Fiona Bell Currie.

V: What about publicity and so forth?

Kate: The marketing. Ah, the marketing. I know something about marketing: as an actress,  I was my own product and marketed myself with,  if I may say so, some modest success for most of my working life. I also ran a poetry performance company that toured schools, colleges and festivals, so I knew enough to know  I absolutely  loathe marketing.       Fortunately, in  marketing, unlike other aspects of publishing, one can enlist support. After a false start I found Nathalie, a brilliant PA in Brighton  and an  equally brilliant assistant in  London. I immediately felt comfortable with  both of them ; Deborah (London) is North American and we were on the same  ‘can do’ wave length about getting the word out there.

V: I read on facebook today that you are personally visiting bookshops. How is that working out?

Kate: We divided London between us and set  out on foot.
It was just like making rounds as an actress, just like pursuing venues with the poetry programmes: I set out  in my black suit with  a copy of the  book(my audition  speech), an information sheet about myself (my CV) and a gracious smile. I offered to  give talks, do ‘author events’ or anything that would help the shop  sell the book.
I was overwhelmed by the response.With only one exception  (you can never win them all) people were friendly, courteous, interested and supportive. Some even suggested shops and libraries I didn’t know about. Every shop I went into agreed to stock the  book. One shop put it in the window.One shop  asked me to come and give a talk.My local newspaper is doing an interview. And the cherry on the sundae: Waterstones Picadilly has agreed to stock the  book with an author event (talk and signing) in November.

Kate: So what did I get out of all this? Confidence. The knowledge that real faith pays off. A sense of how publishing actually works and what publishers have to take into consideration before they accept a book. These things are good and important  to know. Would I self publish again ? Would I hell. Publishing is hard, demanding work. It’s much harder and less satisfying than actually  writing the book.  Next time, I want the prince to come with the glass slipper in my size. Also I think you do need the assurance that someone beside yourself is willing to invest in  you to prove you have actually reached a standard.  This is not necessarily true, I hasten to add, but I’m  from Hollywood.Now, back  to ‘Happy Happy.’


V: Kate, thank you so much for such brilliant, helpful responses. Lots of good luck with Year of Night. And, of course, with the next!

You can read about the book on the Matador Publishing website, the quality outfit Kate chose to publish her novel, here... http://www.troubador.co.uk/book_info.asp?bookid=2168


KATE BESWICK was born in Los Angeles. She was educated at Smith College and Middlesex University, where she won the short story prize awarded by Shena MacKay. She was an actress for many years on and off Broadway, the National Theatre, the West End and on television. She won the Litchfield-Time Warner novel prize awarded by the late Dame Beryl Bainbridge. Kate now splits her time between London and County Cork.
Posted by Vanessa Gebbie at 05:15 14 comments: