72nd ANNIVERSARY OF THE DIEPPE RAID 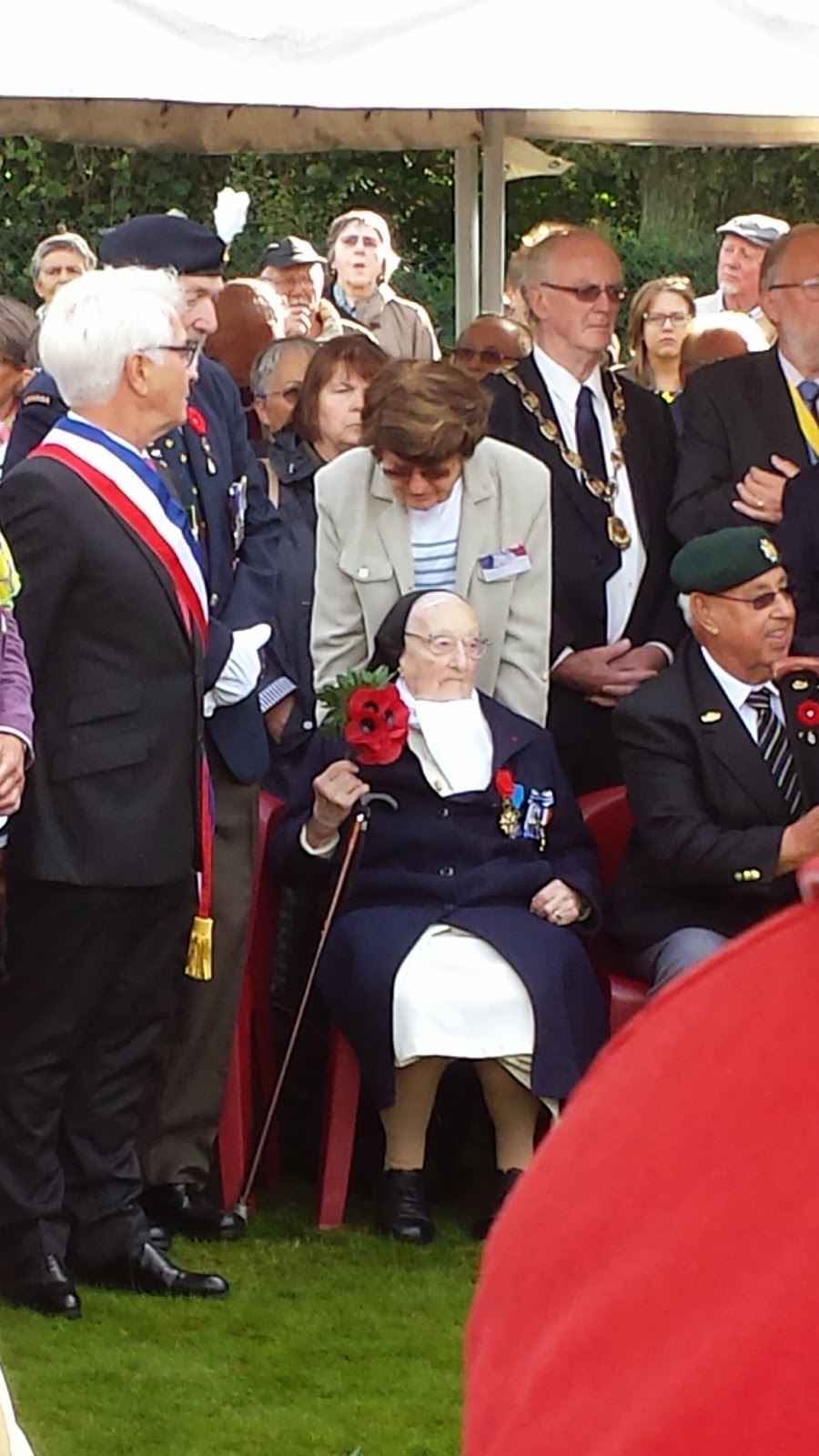 'The Angel of Dieppe' - Sister Agnes-Marie Valois, who celebrated her 100th birthday in July. She tended casualties on the beach.  Seeing a German soldier about to shoot a badly injured young Canadian, she stood between the injured man and the gun and said he'd have to shoot her first. 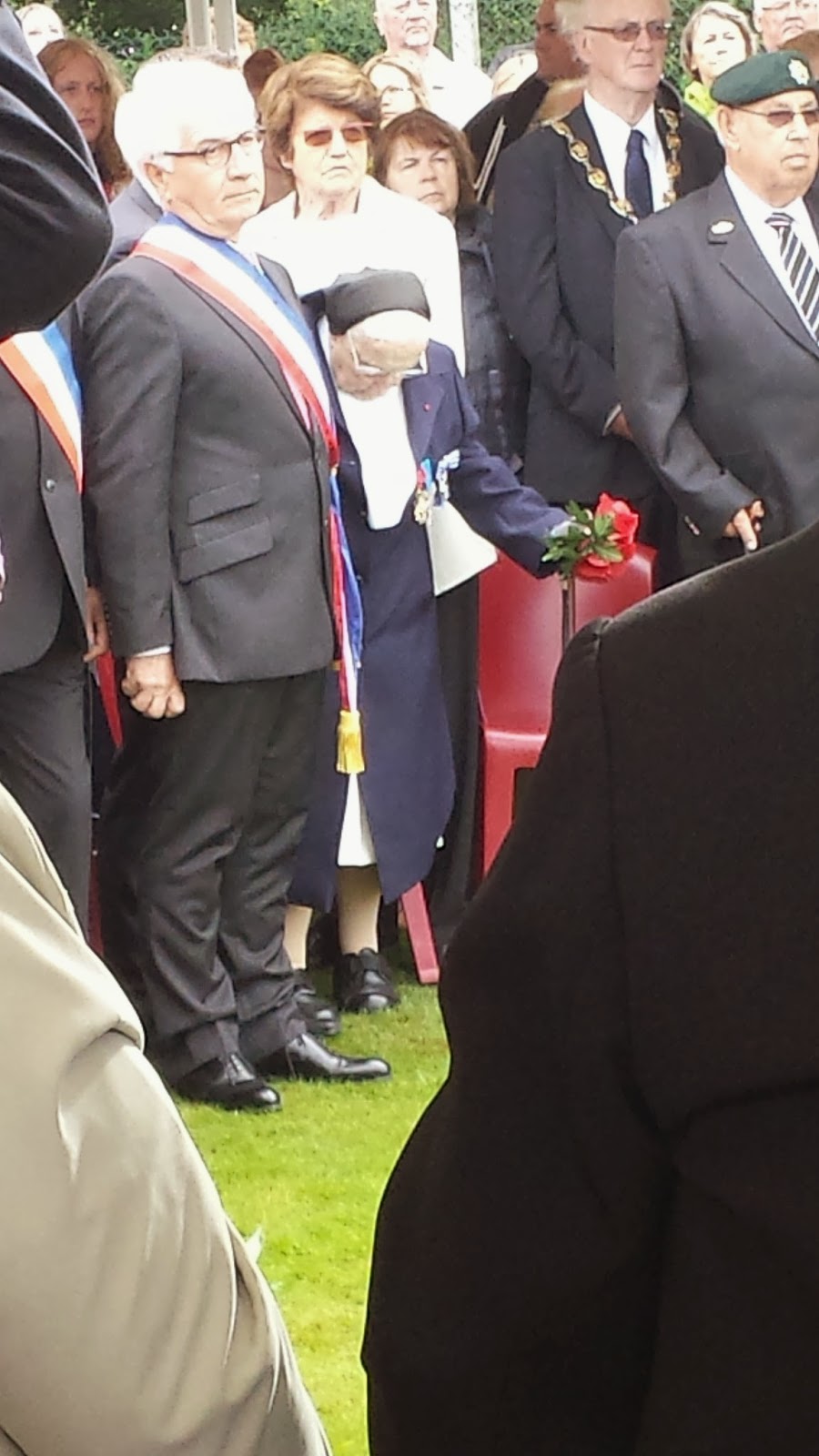 Sister Agnes-Marie laid a wreath. She stood, with help,  throughout the silence. 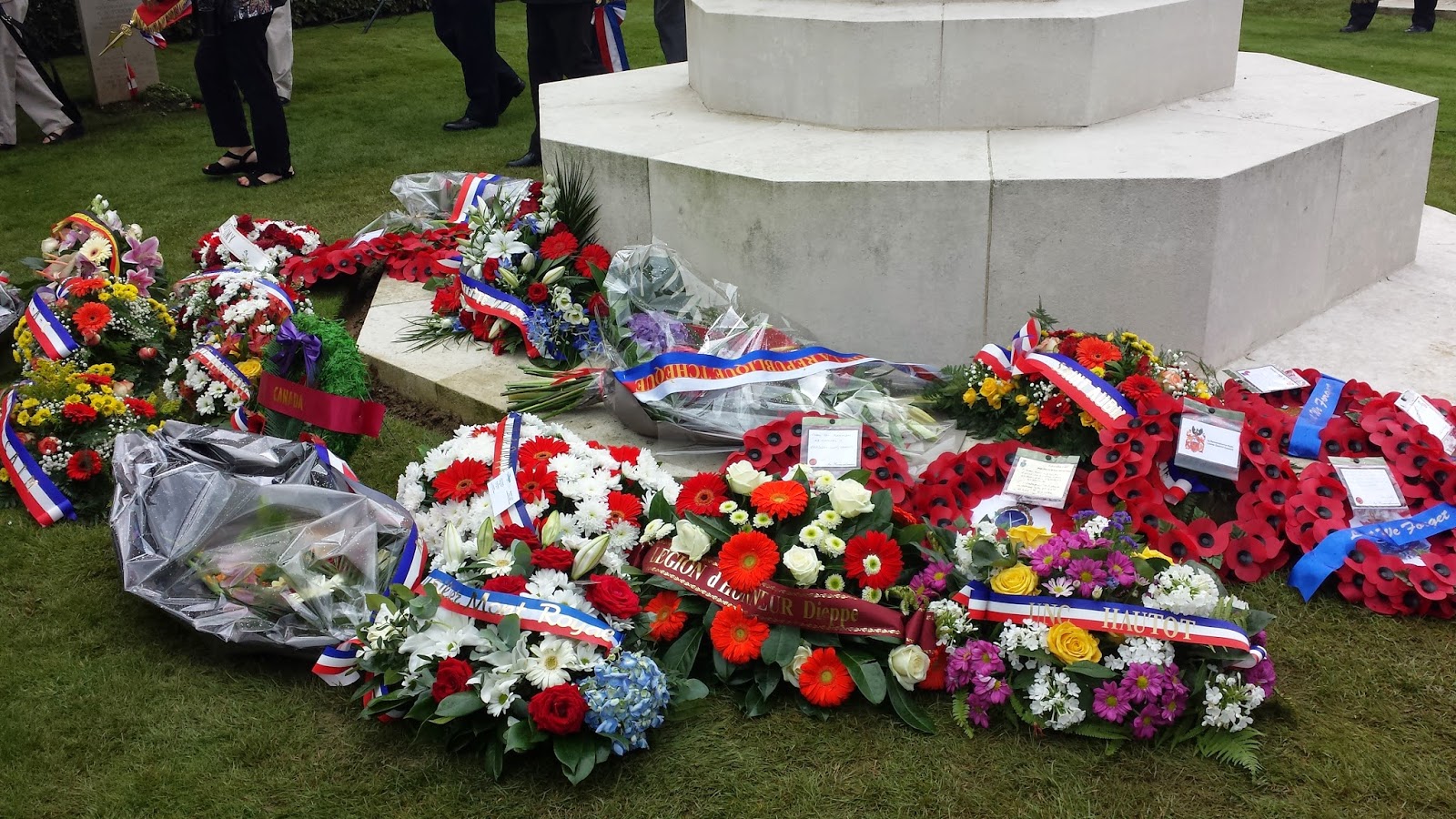 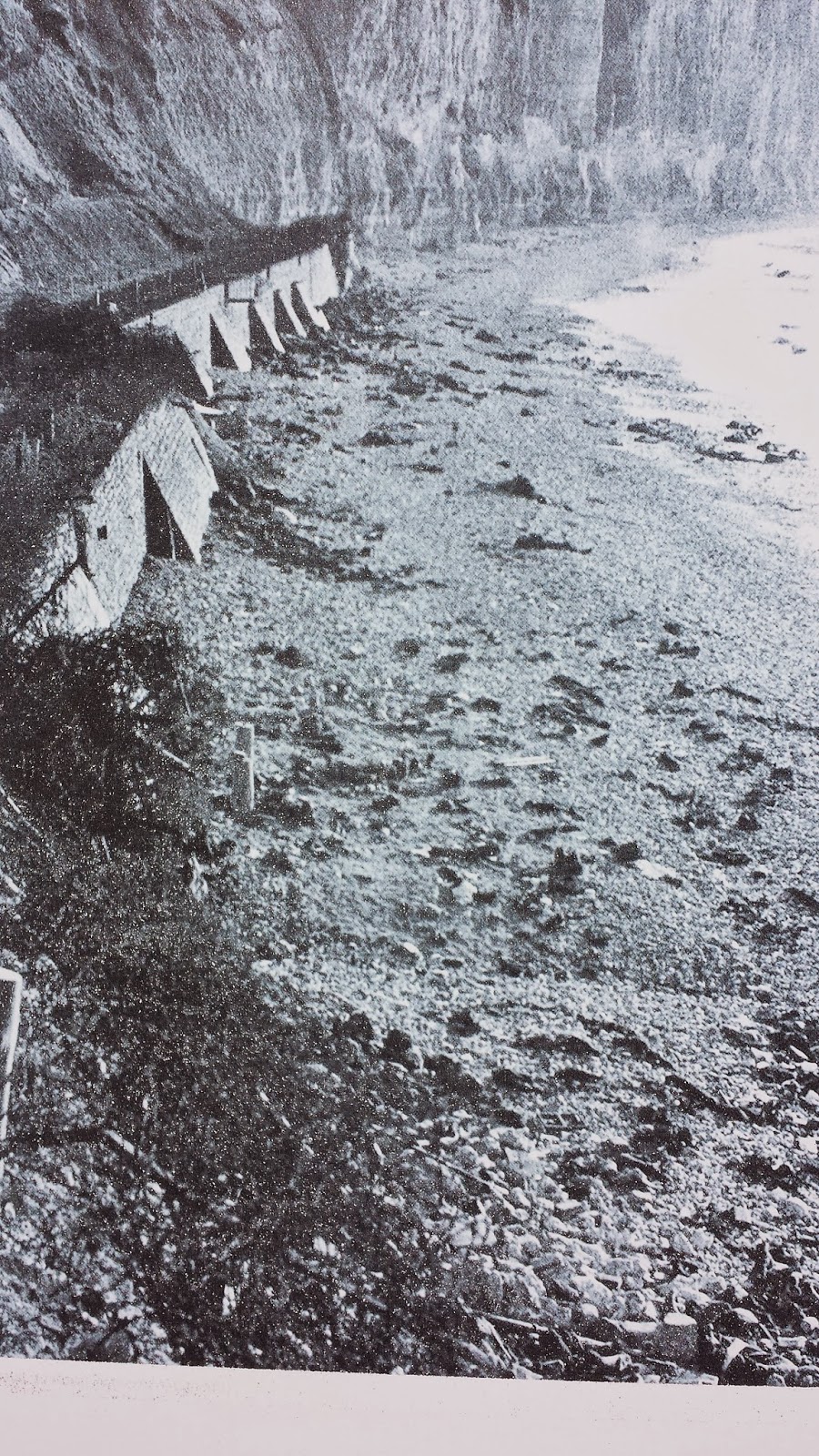 So ended one of the most moving series of commemorations. The series had begin at Newhaven, in Sussex, the week before, with a ceremony at the Canadian Engineers' memorial, as so many of the Canadian soldiers left from here for Dieppe. 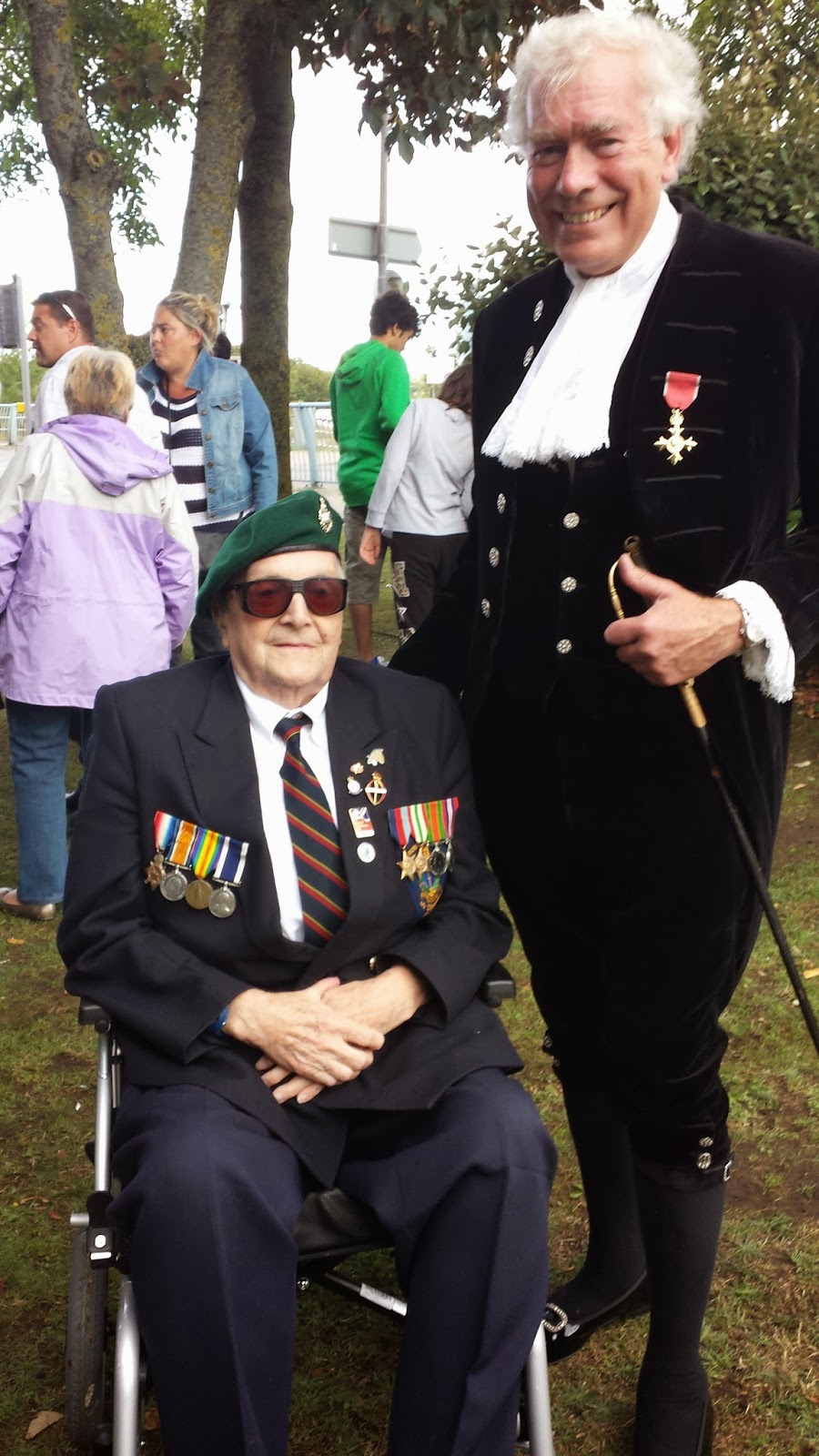 In Newhaven, I chatted to an elderly gentleman in a wheelchair - a veteran of the Raid. His name is Alan Saunders, and he is nearly 92. Blind now, he told me he was looking forward to going on the longest zip wire in Europe, in north Wales, after his 92nd birthday. (!) He was wearing not only his own WW11 medals, but those of his father who served in WW1.

On 19th August 1942 he was nineteen years old and serving with the Royal Marine Commandos. Caught on a French beach amid shellfire and bullets, he and three chums decided to swim for it rather than stay and be killed. They made it five miles out into the channel before being picked up by one of our destroyers.
At the wreath laying, he was just about able to stand out of his chair, make his way with the help of two colleagues across the grass to the memorial, and lay a wreath.

Then he stood alone, snapped to attention, and saluted.

Posted by Vanessa Gebbie at 07:18 No comments:

Earlier this year, I was delighted to discover that a poem written after seeing a call for poems inspired by Adlestrop by Edward Thomas, had been commended in the competition - run to raise funds for Adlestrop church.  Details of the winning poem, which is rather terrific, can be found here: http://adlestroppoem.wordpress.com

The organisers are now going to publish a collection of the winning, commended and the best of the entries, later this summer. Nice to see, and also nice that my poetry buddy Caroline Davies will have her Adlestrop poem included.
Posted by Vanessa Gebbie at 06:16 No comments:

For the Children of Gaza - 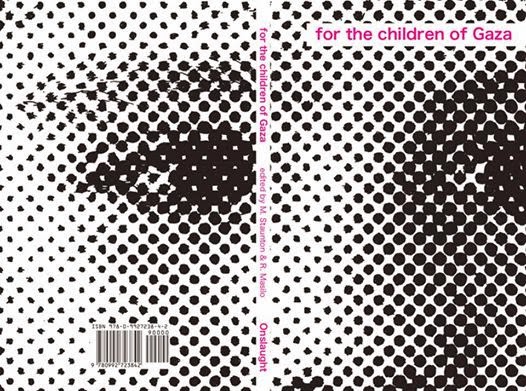 It's a privilege to join many other writers and artists in this collection of poems, prose and visual art,
For the Children Of Gaza. 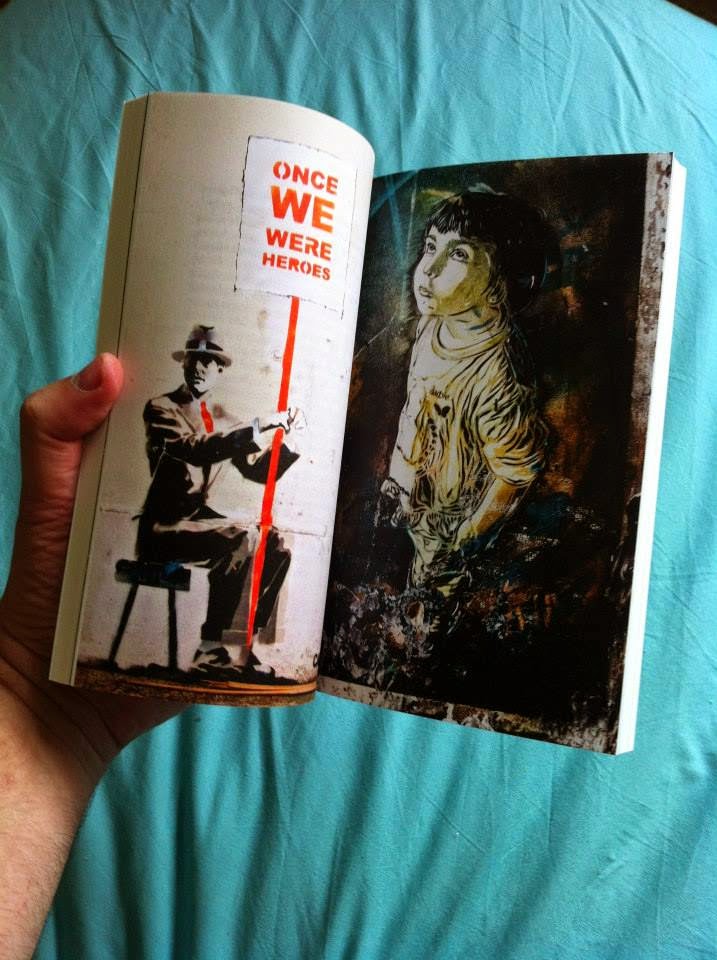 The artwork is poignant, strong, thought-provoking.

The book is the brainchild of Mathew D Staunton and Rethabile Masilo and is published by
The Onslaught Press.

Posted by Vanessa Gebbie at 02:39 No comments: 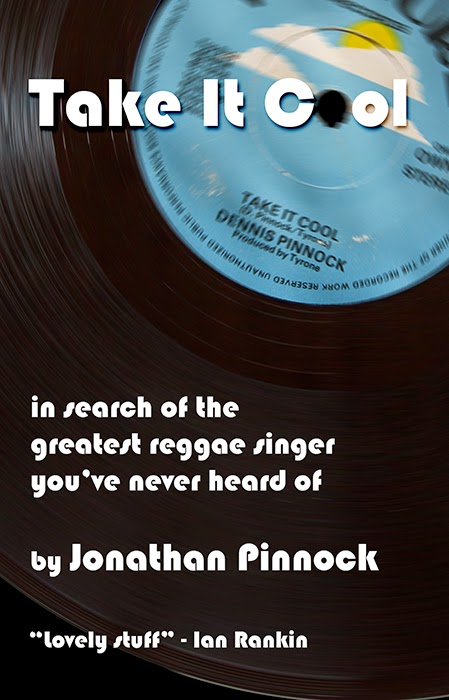 Many thanks indeed to the lovely Vanessa for having me!
Posted by Vanessa Gebbie at 09:43 No comments: