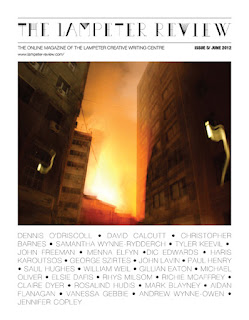 Here’s the start of the extract:

MAMETZ WOOD July 10th 1916
We were to advance in quick time in eight waves and all Harris could talk about was his broken tooth. He talked strangely bright -  “I have a broken tooth, Sir. Sir - my tooth, and it will be aching before too long,” and someone said to shurrup, it would be alright that tooth, and we could pull the rest out if he liked, after. “After what?” Harris said, standing facing the sandbags like the rest of us, laughter all around like we were waiting for a friendly...

Here is a link to the magazine PDF, where you can read the rest. (Contributors get a print copy, and rather lovely it is too) - Kit is on pages 79 - 81 inc.

It is a paradox of Welsh writing in English that the person arguably considered the greatest of our writers, Dylan Thomas, is the one whose influence everyone tries to shake off(... )The Coward’s Tale is remarkable because Gebbie has taken up the baton passed on to Welsh writing by Dylan Thomas and produced a début novel that is powerful in its storytelling, touching in its view of small-town life, and bold in its stylised language..
The comparisons with Under Milk Wood could easily lead to the view that The Coward’s Tale is derivative (...)(her) success, however, lies in the fact that she has dared to pick up a tradition in Welsh storytelling and developed it (...) The effect, both ancient and modern, at times struck me as lying somewhere between that of the Bible and the prose of Niall Griffiths or Cormac McCarthy.
(...)
This novel should certainly stir a debate about the relationship of twenty-first century fiction from Wales to its heritage from the 40s and 50s.

If you are not wanting to throw up at my boundless joy at this, you can read the whole review here:


By the way, there is a stonkingly good museum in the village, dedicated to the life and achievements of Lloyd George. Did you know he was brought up by a shoemaker, his uncle, after the death of his father? No neither did I. Did you know we have him to thanks for the old age pension? No, neither did I. 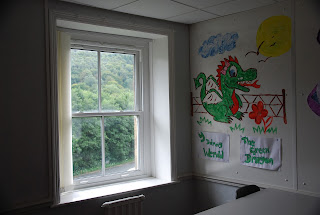