A visit from Meg Pokrass

So, a while back, a facebook friend, the writer Meg Pokrass, invited me to be a visiting editor on Fictionaut, the online writers' hub and forum she helped to create. I had a very enjoyable week or so, reading all the poems and stories that were uploaded - with a brief to pick the ones that struck me as fascinating/good/well done as opposed to those which had the most likes and comments from the members... an interesting ask, yes? And very important, I felt, to acknowledge that bias that creeps into writing group behaviour and try to do something about it. I liked that.
Meg is a prolific writer. She sent me her amazing collection of flashes, 'Damn Sure Right', and I have loved the ride through an extraordinary 80 pieces of work, the vast majority of which have been published in excellent journals. She is also a novelist, a poet, a playwright. And now she is an interviewee here. But before all that, here is a taste of her work, with her permission. 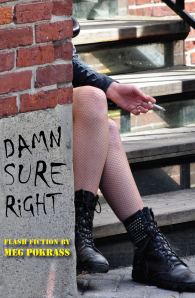 She Wanted a Dog

Her daughter was shy and reclusive. Her husband had wanted a son. Her family seemed downtrodden and anxious. They were a small family of three—fastidious. She thought about the idea of bringing home something furry with hot breath that didn’t come with an elaborate set of instructions and warranty options. She pictured her husband and her daughter at the beach with it, throwing it a Frisbee. The agile dog catching it in his mouth and running, running, running. Her family battling their brittle nature, chasing each other on the sand. The three of them laughing over the brown paw prints on the beige rug after a walk with the dog. They could care less, they would love that dog so much. She could see it in her mind and even smell the dog on her hands. She also knew she was lying to herself. She remembered how it had been hard on their relationship when she had rescued a parakeet during their courtship. He hated knowing the miserable bird was captive in their one room apartment, watching. Fucking became strange and self-conscious. As predicted, the bird became quiet and lost most of its feathers. Finally, she gave it to a cab driver out of desperation. They didn’t break up, but they never spoke of it again.

VG: Love it! And I love the quote about your work from Frederick Barthelme  “Meg Pokrass writes like a brain looking for a body. Wonderful, dark, unforgiving.” ! So - tell me a little about you, and where writing fits into your life.

VG: Wow. isn't it funny, how others sometimes try to undermine what we do? Luckily they are few and far between. How does writing fit into your life now?

VG: Tell me about writing this collection? How long did it take you? How did you decide which pieces to include and which to leave out?

VG: Damn Sure Right is, as the title suggests, a collection of raw, strong
writing, flashes in which characters and their lives are conjured in a few
sentences, with many finely wrought layers of emotion, and conflict. Sexual
experience features large, especially early sexual experience.


VG: A while back you kindly invited me to be a visiting editor on Fictionaut.
Tell me about setting up this online writers hub, and why you felt the need
to have occasional visiting editors.

VG: Brilliant. We've all been in these groups where, if you are not in the in-crowd, or don't say what writers want to hear, you are sidelined. Pack behaviour. Well done for trying to rectify the imbalance.      What are you working on now?


VG: Not exactly a couch potato, Ms Pokrass! Makes me feel dizzy.  Is there an overall message you’d like readers to take away - a sort of ‘this is Meg Pokrass’ message?

VG: Thank you so much, Meg. Damn Sure Right can be purchased from the usual suspects, and is a roller-coaster of a ride, a collection of strong, memorable flashes, 90% of which have been published. Finally, here is another piece, with Meg's permission.

Ma says stand back while she strikes the match, lighting the Wedgewood stove. There is an end-of-the-world whoosh as gas and flame mate—omelets out of scraps are keen, she says, sucking a Menthol—arranging button mushrooms as eyes, red onion slices into tight little smiles. At dinner, my sister’s hair hangs like a thick curtain around her face. Sometimes I’ll poke through it, whispering, how much for your last three bites? A dollar, she’ll say. Ma can even make a piece of cooked cow look lovely, we both agree, trying to raise two children on her own. My sister excuses herself for the bathroom after dinner. Mom and I look at each other as the sink hisses, then the angry toilet joins the music. We pass the time by inventing situations, playing two truths and a lie.

Bio:
Meg Pokrass is the author of Damn Sure Right, a collection of flash fiction from Press 53. Her short novel, Card Houses, has recently been selected for a screenplay adaptation.Her work has appeared in over 150 literary journals. She serves as Senior Editor for Frederick Barthelme's BLIPMAGAZINE (formerly Mississippi Review), and lives near the ocean in San Francisco with her husband, daughter, and seven animals.