'THE COWARD'S TALE' HAS A MAP! 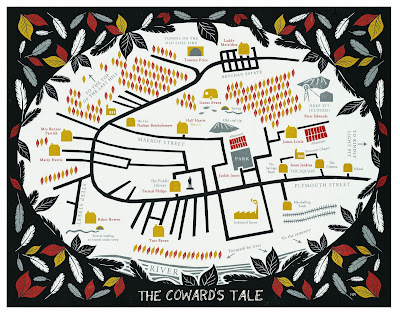 Copied from The Coward's Journey Blog, linked over there somewhere, where I am following all the stages to publication in November...Brilliant! Now I know where I am, and where I''m going. I have a map - and so do my characters. It is very interesting, as I said before, and none too easy, to create a map of a fictitious place. It made me see where characters had turned right to go left, if you follow me... (I wouldn't if I were you!) Beautiful, isn't it? All the main characters are located carefully, close to the place that means the most to them. So - clockwise from the top, you have:

Tommo Price, by the tunnel on the old coal line
Laddy Merridew, on the Brychan Estate (that's his gran's house...)

below them there is:

Icarus Evans in his caravan, surrounded by feathers

continuing round the edge, there is:

Peter Edwards, near Deep Pit (closed...)
James Little, by his allotment which he digs at night
Ianto Jenkins, the beggar, close to Ebenezer Chapel where he sleeps on a stone bench in the porch
Judah Jones, near the park where he finds silver leaves

moving left there is:

Factual Philips, at the Public Library, where he is Deputy Librarian and is probably reading The Collected Adventures of Sherlock Holmes on the quiet...
Tutt Bevan, the undertaker, off for a walk, soon,
Baker Bowen, in his house at the bottom of Steep Street, doing anything but baking

and at nine o'clock there is:

Matty Harris (and his wife Eunice, who will be red-faced with fury at being left off the map)
Mrs Bennie Parrish (who will be delighted to be included...)
Nathan Bartholomew, at The Cat Public House - where he's a lodger

and last but not least, for the last shall be first...