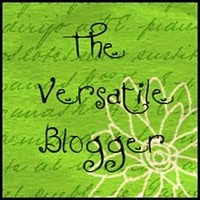 I am deeply indebted to Oscar Windsor-Smith for another coveted award - not only did I get an 'Oscar', a while back, but I now have a Versatile Blogger Award... thank you Oscar.
We are meant to pass it on to a million others, and also to divulge seven little-known facts about ourselves. The first I won't do - and if it's one of those things that visits at midnight and strikes one dead in one's sleep - so be it. The second, I guess I better had - or it would have been churlish to accept the award.

1. I once ate half a worm. My best friend ate the other half. It was a sort of bonding thing - we were six. I can let you know worms are very gritty. And a bit slimy too.
2. I had a common childhood operation at the age of seven. I smuggled my teddy into the room where I was sedated, no one noticed, and it came with me onto the operating table. Said teddy fell off said operating table in mid-operation. Surgeon was a father of small kids, and unthinkingly bent to pick it up... chaos ensued as he had to re-scrub...
3. I wrote my first play at 14 years old. Called "Randy Cilla and the Beautiful Sisters" it was a highly hilarious and rude reprise of Cinderella. The best character was Zipper (Buttons...?) or maybe it was The Hairy Godmother. I came close to being expelled from my boarding school for that masterpiece.
4. I had tea once with Dannie Abse. He was invited to the school to talk to us gels about being a poet. I informed him he wasn't much of one, because he said he threw his drafts away. I think we ate sponge cake.
5. My favourite short story, Cactus Man, written in 2004, explores what happens to the psyche of an adopted nice guy when he discovers his father was a rapist. Did that new knowledge allow a darker side of the bloke to manifest itself? In 2008 I discovered my own birth father could be a very violent man...so far, I have not developed psychopathic tendencies.
6. I used to bite my fingernails. I was told not to, as it was unsightly and unhygenic. I bit my toenails instead. Not to be recommended.
7. I often wonder about that worm...
Posted by Vanessa Gebbie at 10:45