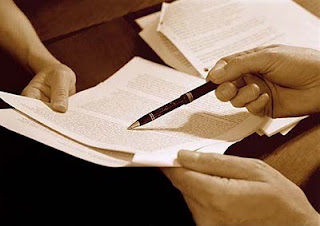 I have just finished the little tweakings (sounds like an address in Surrey...) on The Coward. They took me a couple of sessions, one at home, and one at the British Library, to get away from the internet, phone, cat and various others.
And no, that does not mean that was all there ever was to do!
I found myself approaching this piece of work differently - it is the first time I have written anything so long, so involved, and the process became very different to my writing of a short story - something that tended to need to be all there in draft form before I tried to bash it into shape at all, or I'd lose something, freedom, flow, air... something.
Over the four/five years it took to write The Coward, I polished as I went. Literally, and obsessively. I would write the opening to a section and worry at it for days, reading it out loud, changing a word here, there, and only when I had it as right as I could, did I go on to write more of that section. The process would begin again - reading the whole thing, as far as I had it, out loud. Smoothing, changing, swapping paragraphs over to see if that made it different, better, worse -before continuing.
Sometimes, this process was very necessary. There were great gaps in writing anything of the novel, thanks to external factors. No - I am not whinging - just explaining my process, to myself as much as anything. And to be able to return to the place I was at creatively became quite a leap, very often.
I found reading out loud, slowly, really listening to the words, the rhythms, helped to ground me in the work over and over again, and was also a necessary part of the editing process.
The first draft was completed at Anam Cara in February 2010... and when I came home, I sent it to the marvellous Maggie Gee, with whom I was working on final polishing, thanks to an Arts Council grant. This was the first time anyone had read the whole manuscript right through, apart from its author.
'About 80% of the way there. Publishable already, but will be so much better if you do this, that and the other...'
That was marvellous to hear.. I was getting there. I have to admit, looking back, that there was a bit of me that wanted to hear, 'This is perfection. No need to do anything, oh a typo on page 234...' but I knew it wasn't, and never would be perfection - but it absolutely HAD to be the best it could be before sending it out to my agent.
The world is tough. If I sent him a 'less than' manuscript, and he had ten pieces of work whose authors had taken the trouble to polish, polish, polish on his desk - see the issue?

So how did I approach the polishing process? Maggie prepared detailed notes, pointing out those places where her response to the book became 'teachery' as opposed to 'readery'. That I understood completely. We would discuss the bigger issues, and I would go off to sort out the solutions. It took a long time - working up to a final read from Maggie in the late summer, a final list of notes, and a couple of weeks in Ireland, chipping and chipping away.

Many times during the process, I would print off the whole book, read it through, trying to keep a distance, treating it as a whole, to see what effect this or that change had on the whole thing. In this way, reading it through again, and again, I picked up more little nits and nats and changed those too.
And by October I had a piece of work I felt was right to send to my agent. The attention to detail, obsessively ironing out the nits, guided by a seasoned, marvellous novelist, (also, incidentally first female Chair of the Royal Society of Literature) paid off. He wanted no revisions, and sent it straight out and the rest is history.

So what tweaks can my editor want? As many as she likes, actually - she is so in tune with the book, I have no qualms about anything, and trust her judgement. But there are so few, thank heavens. The process this time was this - to get Helen's suggestions via email. To read carefully - and sit on them for a few days. Then print out the novel again (!) and consider each suggestion separately. And tweak. Often, all it took was a single phrase added. (But of course, I would always end up reading out loud to make sure the phrase fitted absolutely!)

So the only tip I can end on, is this.

If you are not normally an obsessive personality, there is one time you absolutely must be one. And that is when you are editing a novel.
Posted by Vanessa Gebbie at 00:54