WORKING TO A RHYTHM, FINDING EDWIN

My third blogpost for Gladstone's Library,  written a week back now. 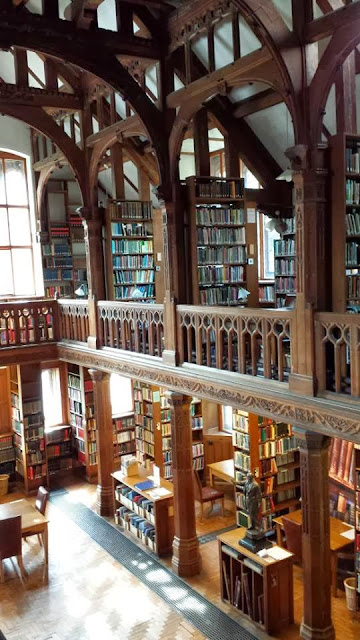 Almost a fortnight now since Gladfest, and a chance to settle into a working rhythm. After a few days of prowling about like a re-homed cat, trying out this chair, and that, I settled at a desk on the Reading Room balcony and have been based there ever since, surrounded on three sides by Gladstone’s own books, and in front of me, an inspiring view to the balcony beyond, the stone-mullioned windows.  Just to my right is the huge bay window at the end of the building, its wonderful detail.
Every now and then, as the day breaks through my fictitious world and I surface into this beautiful place, I will get up and stretch, move a few feet, (steady on now!) pull a book off the shelf, and read a little. Sometimes, the book will hold scribblings by the great man himself, comments, squiggles in the margin, all no doubt meaning something to him should he return to the book at a later date. He adds his own indexes at the back, and you wouldn’t do that unless you intended to return, would you? Sometimes, I find he has seduced me away from my work for longer that I intended, but I don’t mind. Time here is precious as much for what it holds as for how long it is. 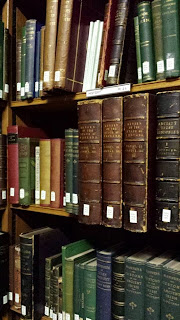 I suspect I would have liked Gladstone hugely. I would have enjoyed the company of the man who could read a German theology book in beautiful, strong German typescript -  and write a single word - Humbug - at the top of a page. I found that on one of my first days here, and it set the tone rather well, brought a smile of pleasure.

All the books hold their own intrinsic beauty - but  right behind me are three of my favourites:  the three volumes of The Works of William Blake, Poetic Symbolic and Critical, edited by by Edwin John Ellis and William Butler Yeats. The books were published in 1893, and presented to Gladstone the same year by the editors - and come complete with inscription, as so many books do in this library. The inscription, flyleaf, volume one, reads thus:

The Rt Hon W E Gladstone
from
Edwin J Ellis.
(P.S. My fellow worker being in Ireland at the moment is not able to sign this with me.) 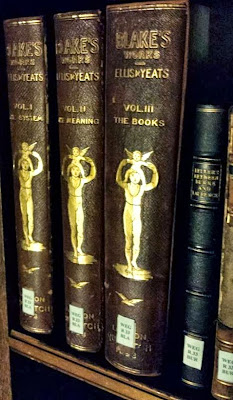 Have you heard of Edwin J Ellis? No, me neither, so I looked him up. He seems to have disappeared from consciousness, apart from his collaboration with Yeats on these Blake books - and to see his autograph made me sad. So I searched about a bit, and found references to Ellis as a painter, a poet, novelist, described as ‘erratic’ and a ‘failure’. OK, so Edwin was fairly normal then!
I carried on looking for Edwin, and found one of his poems - The Land of Many Names - with its passing reference to opium... and I wonder.
Isn’t it nice to breathe a little life back into writers? Who knows, maybe one day, people might  be kind enough to do it for this erratic one, long after she is gone.

The first verse alone is rather beautiful, Edwin. Thanks for writing it. The rest... of its time, I suspect. But that first verse is a keeper.

The Land of Many Names

There is a place where no surprise
is felt at beauty, or true love tried.
Hate cannot find the gate, nor pride.
There do the spring birds learn to sing
and open their hearts as wide
as the eyes
of the meadows that wake in spring.

There the clouds of the golden skies
Find their ruby. The white foam free
of the wave lives there in her maiden glee,
and no hand touches her white side, wild.
The winds cannot hold what they see,
for she flies
like dreams from a waking child.

Dead lovers there, from the days of Troy,
attain the reward our hearts shall keep,
believing for them in twilight sleep,
the while, as maids at a child-birth wait,
we stay till they call us to peep
at their joy,
and find in their fate, our fate.

There, while wind through the garden sings
gently and low in the long sunbeams,
they sleep between summer and trees and streams,
they love through their sleep from hour to hour,
in beautiful crimson dreams
like the wings
of the peace-giving poppy flower.

The watchman called it a Land of Rest,
the lonely, a Land of Love, they tell,
the weary, Eden, whence Adam fell.
But the old who wander the downward slope
deem it Youth, knowing well,
disposessed,
the Land of Eternal Hope.

Edwin John Ellis was born in 1848, the son of Dr Alexander John Ellis, a Scottish linguist and natural scientist. When in his late teens, Edwin Ellis met John Butler Yeats at Heatherley's art school and the two became good friends, sharing a studio. With John Trivett Nettleship and Sidney Hall the two formed 'The Brotherhood', an informal group of artists working under the influence of William Blake. Along with William Butler Yeats, John Butler Yeats' son, Ellis edited a three-volume edition of The works of William Blake, poetic, symbolic and critical, which was published in 1893. His association with W.B. Yeats also extended to their participation in the Rhymers' Club, with Ellis contributing four poems to The Book of the Rhymers' Club (1892) and six to The Second Book of the Rhymers' Club (1894). He also published several volumes of poetry, including Fate in Arcadia (1892) and Seen in Three Days (1893); the novel The Man of Seven Offers (1895); and the verse drama Sancan the Bard (1895), which served as partial inspiration for Yeats' The King's Threshold (1904). Books illustrated by Ellis include Shakespeare's sonnets, nursery rhymes compiled by his father, and his own works. Ellis died in 1916 at Seeheim, Germany, the birthplace of his wife.