And here we go - the second para in the terrific Dot dot dot, New Writing South's buzzy brainchild of a crowd sourced  story, kicked off by who else, Peter James. You can hear him read his opening para here: http://www.brightondigitalfestival.co.uk/events/dot-dot-dot/#.UidFi6V4Pu0

and here's the second!

Right now, Jonas had to hide.

Vermillion day-glo skin-tight shorts and gold lame vest weren’t Jonas’s usual attire, but this was Brighton Pride, the city’s most colourful event, and where better to hide than in a crowd? 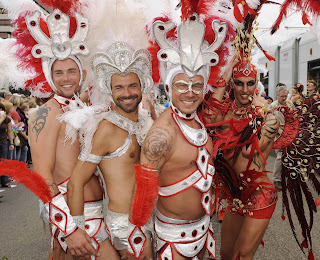 Even better, a parade. He let himself be hugged, kissed, he even sang. He let himself be swept along the sea front by the mass, closer and closer to the old West Pier, where, he knew, whoever had written him that anon email would be waiting.

http://brightonscenic.co.uk/tour/
Posted by Vanessa Gebbie at 07:13