Thoughts on visiting the cemeteries of The Great War

Monday 8th October.
A rainy mid-day, Sunken Road Cemetery, Fampoux, near Arras, listening to a description of the action that took place in the amphitheatre of fields in front, fierce fighting for the heavily defended village of Roeux and its chemical works - battles that raged throughout April and May 1917.
Three specifics:
First, the terrific experience of hearing the detail of a battle from such a vantage point. The terrain now looks so benign... and yet anyone with half an imagination will see far more than crops. And, of course, many of the men who fell in the action are here, below your feet.
Second - the immaculate solemn beauty of this and indeed all the Commonwealth cemeteries. Their uniqueness. Large and small, every one is different. The planting - English country garden - roses, asters, lavender, you name it, it’s there. Tended with huge care and pride often by generations of the same family.
Third - it was lunchtime. Some of us sat on the wall to eat their sandwiches. I had mine by the grave of a 20 year old, and texted my son, the same age, to tell him. He texted back, ‘Good stuff.’

Those three observations just about sum it up, for me. Carnage happened. The evidence is right here. Paying my respects is the least I can do, giving those who fell a little of what they had taken from them. Time.
What about the sandwiches? Isn’t that disrespectful? I don’t think so.

I am reminded of a  service of the Last Post under the Menin Gate at Ypres recently.
A wreath was laid by a young airman, and in support, a whole group, uniforms immaculate, marching in perfect order. To see the wreath laid, the last post ringing out, the young man snapping to attention and saluting before wheeling on his heel and returning to his comrades - was wonderful. As was the normality of passing them no more than six or seven minutes later, as, having marched  out of the Gate, they’d now relaxed. ‘Right, take me to the nearest pub,’ one said. ‘I need a drink....’ They all walked away chatting and joking, into the city.

That’s about right. Job done. Life goes on, for some. To do otherwise is to try to make the men who fell into saints, when actually, weren’t they all ordinary blokes? Not saints at all. Respect is of course due in immeasurable quantities, but I get the sense that it is more than OK, as far as they would be concerned, for you to eat your sarnies alongside, bringing a sliver of the everyday to those who lost their everydays on our behalf. That is not overstating it, even nigh on a hundred years later. Britain would not exist were it not for the outcome of this war. Whatever one thinks of the strategists and their plans, every man who fell, named on a headstone or not, is part of the sometimes faltering juggernaut that ultimately crushed Germany.
I have a strong sense too, that it is important for women to visit. Important for the fallen, not us. This woman has many many roles - wife, mother, colleague, friend, writer, teacher, editor - as well as daughter of a much-missed decorated WW11 veteran - but when I’m there the most important role is that of a mother. Of sons. So in a sense, I’m not only there saying a quiet hello to the fallen, I’m also there for all the mothers who couldn’t go across to see where their lad was. For all the mothers who aren’t here any more. Maybe they know. Maybe not. That's OK.
How do I feel after visiting the battlefields and cemeteries, six days on the Somme, Arras, then Ypres? Wrung out, still. But I think that’s natural. We talk about ‘paying’ our respects. This act is not cheap - it’s something that costs. Maybe it is the mix of response that is so exhausting. Sadness, for every single man who fell, for their families and friends. A determination that we who follow on must not forget. The deep peace of these places - every response builds into a mesh of emotion that is impenetrable at first. It lifts after time.
“Battlefields are one thing, cemeteries another. I wouldn’t bother with the cemeteries.” A quote, from someone gloriously unaware of the effect of what he was saying.  I was just sad for the speaker.  The effect was to shriek his ignorance. It was to reduce a battlefield visit to a disneyesque experience, sanitised and two-dimensional. You might as well draw up lines of opposing plastic soldiers on a model of the terrain, knock them over with pea-shooters in order of battle-history.
What did he think he would find in the cemeteries? I don’t know. But for my money he was ignoring some of the biggest reasons to go to the battlefields. Those reasons are not those things you can pick up in text books. To avoid visiting the cemeteries is not to allow yourself to be overwhelmed by many stark realities.  Not to allow yourself to feel. If we seek to protect ourselves from our feelings - and that may be one reason for my colleague ‘not bothering’ with the cemeteries - is that not a little dangerous?
It is hard not to feel sadness standing by the grave of a lad who went to his death on the battlefield from a farm in Sussex, or a terrace in a Welsh valley town.  One of the realities of war is the vastness of the numbers. Vast numbers of graves of lads like this, headstones with names, dates, inscriptions.  Vast numbers of graves alongside, holding remains that were un-nameable. Name after name after name on the many memorials to the missing. 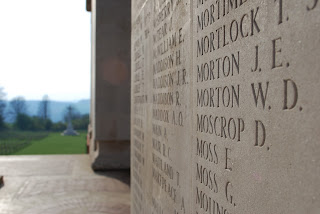 We had an interesting difference of opinion on the Memorial to the Missing of the Somme at Thiepval. To many, it is the ultimate memorial, the best. Not to me. It is majestic, yes, overwhelming, yes - but it is something else. It sits astride the ridge like some gigantic alien, no lack of hubris, a definite air of triumphalism. It lacks beauty. Contrast it with the Canadian Memorial at Vimy Ridge, the Menin Gate at Ypres, Memorials to the Missing at Ploegsteert, at Arras, at Vis en Artois or Tyn Cot. There, beauty melds with sadness to produce an extraordinary, deep peacefulness. Thiepval holds no peace. It just shakes its fist at the world. I wonder whether the triumphalism of Thiepval might have been an additional thorn in Germany’s side during the mid 1930s...provocative? Who knows?

Visiting Langemark German cemetery is a very different experience to spending time in Commonwealth cemeteries. In comparison it is dark, stolid, Wagnerian in character.  At its heart is a mass grave holding some 25,000 soldiers, guys who, just like our own, fought for something they believed in, most of the time - you can’t forget that. There are also two British soldiers buried here, as there are often German soldiers buried in Commonwealth Great War cemeteries. My writer’s imagination with can’t help but create irreverent fictions in both settings - unsettled after-hours conversations. Black humour and war go hand in hand. It helps to salve the harshness.
Apparently, some time into the war, our cinemas screened newsreel footage showing bodies on a battlefield. Beforehand, only ‘managed’ information had been screened - propaganda-led. Sanitised. There was uproar. ‘But people are dying...’. Well, yes. That’s what war does.

Maybe at the tail end of the Victorian era with its predisposition to sentimentality, the lads now in these graves might have written letters home busting with sugary cliches, but meaning every single word. 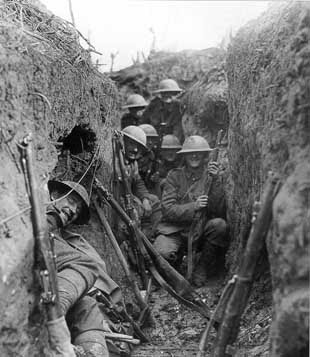 Then, they’d turn on the black humour and belt out trench songs they’d never in a million years sing in front of their mothers, giving a V sign to the reality they faced: 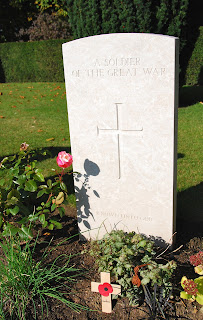 Writing this is akin to why I go - quite apart from finding the cemeteries and memorials to the missing deeply moving places, and feeling a strong sense of 'Be yerself Missis, that's all we want...' - each time I read a name or stand by a headstone saying ‘A Soldier of The Great War’ I am acknowledging that person existed and while he did, even if it was for a short time, he accomplished something far more extraordinary than I ever will.


Pics of Sunken Road Cemetery and Langemark German Military Cemetery are by Jeremy Banning.
Posted by Vanessa Gebbie at 04:51