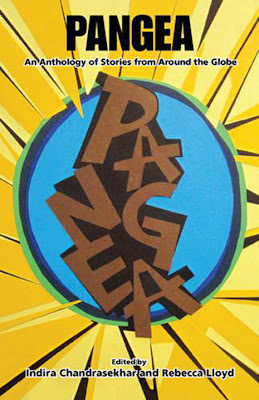 A couple of months ago, a new anthology was published by Thames River Press, entitled Pangea to reflect the multi-national nature of the contributors. Many of the contributors have never met, and the two editors, Rebecca Lloyd and Indira Chandrasekhar, live on opposite sides of the globe. They do have one thing in common, and that is that they at one time, were members of the short story group on the online writers site WriteWords.
Pangea has attracted some nice reviews, and there have been many many blog interviews and articles since its launch in Bristol back in July, at which I read - because I am glad to have a story in here - a short piece entitled Breakdown, which was first published in the photojournalism magazine Foto 8.
The blog  tour draweth to an end, methinks, and I am  delighted to host Pangea contributor Tom Williams, writing about his story, and about his writing life.
Over to you, Tom!

'You're Dead' began at an Arvon course I went on several years ago. It started with a workshop prompt to write about a place rich in sensual description, and I found myself writing about a long, dark corridor from my childhood school, which in my mind still smells of varnish. I set up a desk in the garden shed at Totleigh Barton, and throughout the rest of that week the skeleton of the story fell into place, so that by the final evening I had enough of a story to read out to the rest of our group. In reality, this was only a first draft, and on returning to my flat in London I spent many more weeks trying the reshape the story, attempting to iron out the story's two timelines - morning and evening of the same day – and how they related to one another within the narrative of the story, whilst maintaining the voice of the narrator.
I was fortunate enough that BBC Radio 4 recorded the story as part of their Ones to Watch series. This provided an unusual opportunity for me to hear another person – in this case the talented actor Samuel Barnett – read my story. It was strange to hear emphases and silences in places other than those I chose to add them; listening to the recording distinguished the voice of the story's narrator from my voice as writer. It reminded me of the thought that I can only paraphrase here: that a writer can only decide the point at which their story is sufficiently finished to allow it out into the world; once it is let out, it takes on a life of its own, from which point the writer has no further influence on how people choose to read it.
I spent my early 20s working for literary agencies in London, and a great deal of this time was spent reading the so-called 'slush pile' of thousands of 30-page samples submitted by hopeful writers. It was like panning for gold in a mountain of gravel, and I read more bad writing during these years than I care to remember, in the hope of discovering something special. On one or two occasions I did find treasure, and was in a position to witness the transformation that such discovery can bring to the life of a writer. There are few things more inspiring than seeing a manuscript go from a first draft written in lunch-breaks or on busy commuter train journeys, through stages of editing and submission, to the point where a publishing deal is signed, the first edition printed, and the author able to quit the job they loathe and turn to writing fiction full time.
Reading the slush pile left a lasting impression: if I was going to write, which is what I wanted to do more than anything else, I would only allow myself to do so if what I produced was any good. In my mind, there was already far too much bad writing out there for me to need to add to it. As a result, my output became painfully slow – I tweaked and edited obsessively, and rarely felt that anything I produced was even close to finished. You're Dead is one of only a handful of stories I wrote during the years I was reading the slush pile, as I became almost paralysed by over-analysing my output.
This changed last year when for the first time I took part in NaNoWriMo, in which participants are set the goal of writing 50,000 words in a single month. It was truly liberating to switch off my inner editor and simply write, every day for a month, without worrying too much about what came out. For some people November has become synonymous with growing moustaches; for me it is now the month of words. And so next month I shall again be switching off my inner editor and allowing the words to pour out, without concern as to whether they pass some litmus test of literary worth. November is for celebrating words, for producing a first draft, and I urge anyone and everyone to join in with this wordsmithery. 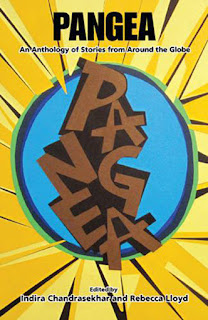 Thank you Tom - and if anyone would like to buy a copy of Pangea - here is a link to its page on the Book Depository.
Posted by Vanessa Gebbie at 11:38