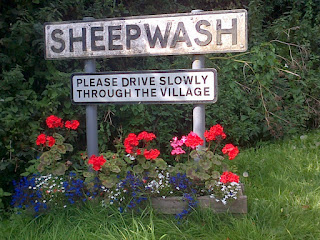 As everyone knows by now, I can’t write much serious stuff at home, and take myself off to far-flung places to find the muse. Thanks to a rather large birthday, I was able to spend five nights at Retreats for You last week, in deepest darkest Devon. Actually, it wasn’t... the sun shone most days, the village of Sheepwash is beautiful, and the 18th century cob and thatch house is quirky and rather wonderful.

Owned and run by Deborah Dooley and her joiner husband Bob Cooper, Retreats for You is a heartwarming experience from welcome to goodbye. Deborah (or Deb, never ever Debbie...) was waiting for me when I pottered at five miles an hour up the lane into the vilage, and she came out to say hello, help with bags, and ask where my clothes were... I’d only got one small bag of clothes, was wearing the rest, the other three bags were books, and novels, and papers, and writery stuff. Not used to taking anything but a very few sloppy comfy clothes when I whizz off to my usual writing retreat in Ireland, I was momentarily thrown - did Retreats for You writers dress for dinner? Oo-er.
I am rather happy to report that they definitely don’t. I had smashing company - one writer was working on a final polish of a rather terrific fantasy novel, another, about to burst on the world when her first (and deliciously controversial) book comes out in early 2013, and who until then is wearing a large bag over her head, started a hilarious YA novel that had us in stitches, and a third was in the early stages of a very poised series of novels with just a touch of the surreal...

The house is great - it has been through many different guises in its time, and has settled rather nicely into a comfortable, somewhat rambling although not over-large family house that lends itself well to opening its doors to writer-types and others.  Tip: I'd check that all the guests are writers or other artists of some sort - Deb and Bob occasionally accept B and B guests, although this is rare.

There are four study-bedrooms, a mix of comfy doubles, twins and singles. There is crisp white linen, an endless supply of white fluffy towels, and white bath robes and slippers are waiting in every room. Deb and Bob have worked hard to make the rooms bright and fresh  - painted floorboards, hand made wooden shutters on every window, white cob walls. The rooms at the front of the house, overlooking the square have slightly larger windows if natural light is your thing. The rooms at the side are atmospheric spaces, in the older part of the house, I’d guess, with thick walls, and windows pushing up into the thatch. The bathroom upstairs is awash with handcreams, bodycreams, body scrubs, shower gels, shampoos - it is hard to get out of there - I had to try everything, naturally.  There is another shower room and loo downstairs. There is also a visiting massage therapist and beauty therapist.
The village of Sheepwash is on a hill surrounded by rivers and low-lying ground... apparently the name originally meant ‘surrounded by water’. Which is odd because that's also what Ringmer means, (where I live). There is a glorious walk by the river, a Pre-Raphaelite dream of a place, so much so I expected Ophelia to float past.
Deb is an amazing power-house of organisation and support for her writers, unwilling to let you do anything except relax and write. Breakfast can be any time from 8 to 9.30 - after that it will just be toast -but for those who do make it down in time, bacon eggs, tomatoes, mushrooms appear from the kitchen with great regularity. She will have been up well before you, and will have gone for a run, and be wearing a natty pinny over her jeans. You are not allowed to clear tables. Lunch was outside on a couple of occasions, in the yard, where we feasted on salads, home made bread, cheeses, soups, salads, fruit. Suppers were great too, candles on the tables, a chance to catch up on the day and natter with Deb and Bob before going to the sitting room to lounge in front of the fire on squashy sofas. Readings, or natter, or telly - Downton Abbey ruled one evening, and Great British Bake-Off the next. She works incredibly, but incredibly hard. And if you check out her website, has been a journalist for years - and that is something that still takes up time. Amazing woman.

The other half of the Retreats for You partnership is Bob the joiner, who once worked at Windsor Castle.  He also makes excellent cups of tea. The website said that he offered carpentry workshops in his workshop, so I asked, and lo- spent a glorious morning under his tuition transforming a piece of wood into a useful something. I think it is a cheeseboard, or a breadboard.

So, did I write much? No - I spent the first couple of days catching up on Lyn MacDonald’s book ‘Somme’. Then I spent the next two rejigging and revising and generally bothering the first 20 pages of the next novel. The voice is off. And  of course, making a cheesboard. This was a retreat in all senses - relaxing, and rather blissful. And the cherry on the cake was hearing, just before I left,  that I was one of the winners of the 2013 Gladsone's Library residency. I left feeling absolutely wonderful, ready for anything.

Retreats for You costs £68 per night, slightly less if you go for seven or more days. A workshop with Bob costs £40. I reckon it is excellent value, and would recommend it highly - I have long been in touch with other writers who go here, and love it - now I know why.

PS - Do not call Deb Debbie. She does not like it.  No - she hates it. For me, that was a bit like telling Basil Fawlty not to mention the war...