Memorandum - poems for the fallen 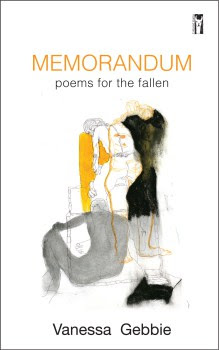 My poetry collection is on the chocks from the lovely Cultured Llama - here is the book's page on their website: http://www.culturedllama.co.uk/memorandum

Lovely publisher, terrific cover based on an original image by Michaela Ridgway - Memorandum has had some wonderful endorsements. I am a lucky person.


Vanessa Gebbie’s First World War poems evoke memory and battle, ranging from memorials and Armistice Day parades to stabbing pain. From the idea of a shell reverting to its unmade, peaceful state to dead men buried in Brighton and France being mourned by their mother in Glasgow, she shows the often agonising and transformational effects of war. There are heartrending images such as the Tower of London’s ceramic poppies seen as callow recruits, doubts about a corpse’s identity and how dregs at the bottom of a cup can be reminiscent of the deadly Flanders mud. Blunden and Rosenberg, witnesses and war poets, are here. But this is a modern view, wise and compassionate, of Europe’s fatal wound.
Max Egremont, author of Siegfried Sassoon: A Biography and
Some Desperate Glory: The First World War the Poets Knew
Vanessa Gebbie is that rare breed of poet who understands the trials and tribulations of the ordinary Tommy. Often based on her own research, her annual battlefield visits and inspired by soldiers’ personal stories, these poems are multi-layered, intelligent and deeply moving. They will strike a chord with those who not only read history, but want to understand it.
Jeremy Banning, military historian and researcher, battlefield guide
Memorandum is a haunting and sharply focused collection that summons voices from the shadows of the First and Second World Wars. In spare, poignant language and a range of forms, the dead who linger around memorials and battlefields slowly step again into the light. History may remember them collectively, but Gebbie’s achievement is to present, with sensitivity and without sentimentality, lives rooted in the particular rhythms of hometowns, families, memories. Dialogues are resumed between friends and enemies, between grieving survivors and the lost. War is never truly finished, cannot be tidied away. Memorandum attends to such complexities throughout with an unflinching eye.
John McCullough, author of Spacecraft and The Frost Fairs
From the beautifully tender opening poem, ‘Cenotaph’, these poems rise like ghosts from a scarred landscape as Vanessa Gebbie responds to war memorials and those whose lives were cut short by war. These poems display her deep knowledge of the terrain, chalk, clay and woodland where they fought, and all in the voice of a natural poet.
Caroline Davies, author of Convoy
Praise for Vanessa Gebbie’s previous pamphlet, The Half-life of Fathers…
This is haunted, haunting poetry that both arrests time and attests to its power.
Times Literary Supplement
Posted by Vanessa Gebbie at 10:46