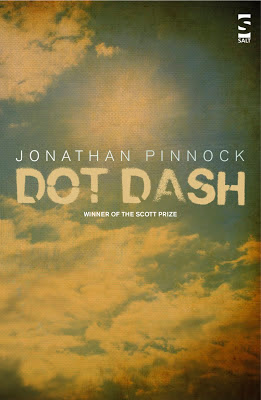 I am thrilled to crash in to a blog tour in celebration of Dot Dash, the long-awaited (in some circles, mine for one...) Scott Prize-winning collection from Jon Pinnock.
I thought I'd start with one of the worst questions any writer can be asked - 'Where did the idea for xxx come from' - because you usually can't answer that. 'From my head. Duh...' is the standard reply. However -  structure is another matter, methinks, so I can ask it with impunity. This collection is alternating tiny tiny stories (and I mean tiny - one is reproduced with permission below...) and pieces of 'normal length (what's that?) short fiction.
When I was a kid, I loved Roald Dahl. Actually, when I almost grew up, I still loved the stories of Roald Dahl - and I think Jon has the same magic about his work.  So there you go - Jon Pinnock is Roald Dahl's natural successor.  Quote.
The work feels so 'nutty' and supremely creative, free-and-easy - and yet something unexpected is always round the corner, waiting. It is very clever stuff, an absolute joy to read. Dare I say it's perfect for Christmas stockings? No? Oh OK, I won't...


1. The obvious worst question is ‘where did the idea for tiny tiny pieces interspersed with larger pieces come from?’

First of all, I like things to have some kind of structure. I'd been playing around with tiny stories on Twitter (and elsewhere) for a while, initially just to see if I could. I was quite pleased with the way some of them had turned out and I thought it might be nice to incorporate them into my putative collection. It turned out I had enough to alternate the two types of story, so I now had my structure.

2. Do you think a very tiny story can ever hold the weight of a  full length short?

Sometimes, yes. For one thing, a good tiny story - like, say, the classic six-word Hemingway one - is inherently memorable, because you can literally remember the whole thing without much effort. More importantly, because of its concision, the reader has to work a bit harder to engage with it, and that makes it ultimately quite satisfying. The other thing is, sometimes how much you like a full-length story can come down to just one line. A tiny story isolates that line.

Professor the said, "surprise a was that, well." Backwards run to began time, on machine the switched they when."

4. Do the shorter pieces here serve several purposes? What?

The primary purpose is to give the collection its structure. I think there's maybe also a sense of    giving the reader a little break between courses - to refresh the palette if you like. If I were to be honest, the marketeer in me would also see them as an opportunity for differentiation - a bit of a talking point, perhaps.

5. Your work remind me of Roald Dahl - snappy pieces, often amusing, then suddenly, a turn in the journey that takes me somewhere unexpected. ‘After Michaelangelo’ for example. Do you have a relationship with the wonderful work of RD?

Oh yes. I used to read a LOT of Roald Dahl short stories back in the day. He is, I know, a bit unfashionable these days, and the idea that every story has to have some kind of twist in it is regarded as a bit naff. I can see that, but at the same time I do like a story to come to some kind of conclusion, to have some kind of point to it, and I don't see any harm in a well-executed twist as long as it doesn't come out of nowhere. One of my favourite recent examples is "Far North" by Sara Maitland, which performs the most extraordinarily breathtaking handbrake turn - and then you go back over the story and realise that everything's been pre-planned without you realising.

6. I love the way you can tell a story that is on one level entertaining - but which holds real weight. ‘Return to Cairo’ for example. Or ‘rZr and Napoleon’ to name but two. When you start a story, is it ‘inspired’ in some way by something you want to say? Or does the ‘something’ just appear? 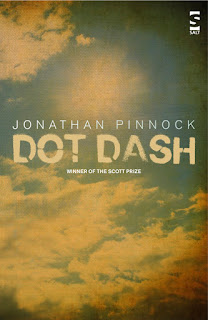 7. What does it mean to you to have won The Scott Prize?

So many things. First of all, it's wonderful to have a collection published at all, let alone one with "Winner of the Scott Prize" printed on the cover. And it's especially wonderful to have my name on a book published by Salt. When I started out writing seriously a few years back, all the best collections seemed to be published by them - including one about a glass bubble, I seem to remember - and it became my ambition to join their list. But I guess the most important thing is validation, though. Sometimes you need someone to say to you, yes, you can do this.

8. Sticking with competitions - you have many many competition credits - what is it about your work that sends it to the top 10% regularly, do you think,?

Ha. You should see the list of the ones that have flopped! Having seen things from the judge's position as well now, I guess there are a few things that I've done - almost unconsciously - to make my stories stand out a little. I always try to make the title intriguing, for starters. But I think the most important thing is that I tend to come at things from a slightly unusual angle, often with a bit of humour. It's surprising how few short stories there are that are prepared to risk a laugh along the way.

9. Loads of good luck with this collection - and is it too soon to ask what’s next from the Pen of Pinnock?

Thank you! Well, what's next is an odd non-fiction project that is currently out on submission, and I have absolutely no idea what's going to happen with that. I'm trying to work out what happens next. I've probably got half of another short story collection in the can, but it's going to be a few years before anyone lets me publish that. I've also got nearly enough poems for a collection, but  - well, that's not really going to happen, is it? More seriously, I'm about 5000 words into a reasonably serious scifi-ish novel and I really am going to have to decide whether to go any further with it or if I'm going to try something else instead. I have quite a few novels hidden away in a metaphorical drawer that haven't made it past the first chapter or so, and I suspect this may turn out to be another one.