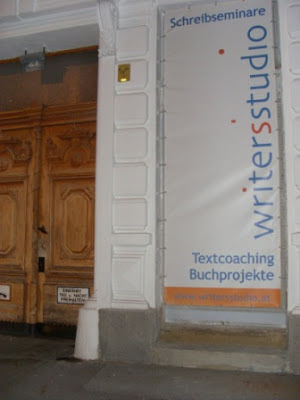 1st, 2nd, 3rd and 4th November. (Re-) Start that Novel! A four-morning workshop in Vienna.

The first question is: Which is easier - to lead a workshop for  ten writers, or three? It sounds a no-brainer - until you factor in the following: Writer 1 wanting to start a genre novel, happy to write in English, mother tongue German. A list of ideas, all different.  Nothing started. Writer 2 is already working on a memoir in German, but her spoken/listening English is fine. First person narrative. And Writer 3 - English speaking and writing, but who understands and speaks good German. She has a hugely complex novel that has been on the chocs for a long time and is not finished.  If you do a word count, it already sounds like a paperback's worth,  has a need for clarity, order, structure.  Revisiting. A need for a game-plan.
The second question - how can a single workshop series deliver the goods for three completely different practitioners, three different pieces of work?

The answer seemed to be to address their specific needs by giving them all individual time when necessary, eminently possible with this small number. By using group sessions to focus on craft issues which would be useful to everyone.  To devise exercises that might spark something different for everyone. And by making good use of the fact that we were four brains, four writers - harnessing group intelligence, even though I was the one who was lacking in language skills.

I'm obviously not going to give away what my writers were working on, but by the end of Day 1 a lot had happened. Given a few pertinent questions to address, Writer 1 was away with her first novel, making notes, planning, exploring,  having fun. Writer 3 was considering the question of timelines - as the seeds of something important were already in the work, but hidden. Once light was let in, there was more than one 'Aha!' moment.  Interestingly, after one great exercise, Writer 2 had discovered a rather important character had been waiting in the wings to contribute massively to her memoir. A different voice.
The different voice was speaking, as was the main character, in German. It was important for us all, me included, to listen, to see what came across - and so Writer 2 shared this new voice over the last couple of days.
Group feedback in workshops/writing groups can be a sticky one. Encouraging writers to share new work with people they don't know, people who comment on unedited/unpolished work from an unknown level of expertise, can be the wrong thing to do - at best it may be useless, at worst, potentially damaging for the writer.  Beneficial for the commenter, maybe...
However, a couple of days in, the group had gelled. We all knew a little more about each other and our work. Then,  we discussed and agreed a form of analytical feedback and the writer sharing their work could request specifics. In this way, we controlled a process that can easily go awry. Purely subjective broad-sweep comments did not occur - neither did comments designed to say more about the commenter's 'brilliance', as opposed to the work in question. Ahem. We've all met that one, yes?
One of the specifics for Writer 2 was obviously 'How well differentiated are these voices?' I was interested to see whether I would pick up anything that differentiated this from the original voice - and indeed - whereas I would not 'understand' the content, whether I would 'understand' the underlying music of the new voice, hearing it as  different to the first.  This process reminded me a little of "Poem in the space between languages" - my collaboration with Dutch poet Siennke de Rooij at the 2011 NAWE conference,  written up in Writing in Education, the NAWE magazine: http://www.slideshare.net/sienekederooij/poem-in-space-between-languages-in-nawe-mag-56-1-spring2012-sd-r-def (see pp 26 et seq)

Suffice it to say that in Vienna, the 'underlying music' of Writer 2's voices came across beautifully. They 'spoke' across the language divide. I heard different rhythms, different sounds, different inflexions, as the different vocabulary and level of maturity in each voice sang across the space. I listened to the other two German speakers addressing the questions (discussions were in English) in a professional, tempered manner, hearing them giving the sort of feedback I would be pleased to receive myself. Reflecting that the voice was indeed well-differentiated. That the vocabulary, the rhythms, the tone, felt 'right' for the speaker.
Fascinating stuff indeed. And by the end of day 4, Writer 2 had progressed a long way with this voice - writing in her own time as well as in the workshops. Indeed, the new voice had opened up avenues she had not thought of for the memoir. Different perspectives, enriching, layering, bringing more than just surface interest.

Writer 1 wanted to begin her novel. So her 'homework' after day 1 was to write three different openings. Start in different places, use different voices. Experiment. Enjoy. And we would give her feedback the next day, saying which opener held the most potential, and why. First, we discussed what a good opening does. How hard it has to work. What does it have to do, ideally? We ended up with quite a list. Writer 1 then shared the first two versions, both of which were fine... but...then came version 3. No contest! It was as though the other two had been written in the very early stages of a novel's development - whereas this one - the voice, the characters, where she had chosen to begin, the level of intrigue, and more than that, the confidence/assuredness, was palpable. We all gave her good feedback to that effect.
It turned out that the first two openings had been written as homework, the night before. That they had 'felt' sticky, forced. The third had been written when she woke up, that morning - and had flowed perfectly. There's something about sleeping on your ideas that makes them appear fully clothed, sometimes!

Writer 3 has written about the workshops herself - so rather than repeat what she said, here is her version! http://mercsworld.blogspot.co.uk/2012/11/vg-in-wien-1-workshop.html 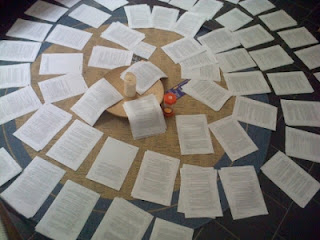 and here - a photo of  the novel... finally printed out, on the floor in scenes, ready for labelling, moving about, rejigging, playing, sorting timelines...

So - three happy novelists - much further on with their projects than when they started - and that's great!

The few days in Vienna also included an evening reading at Shakespeare and Company English bookshop...
Thanks so much to Sylvia Petter for her invitation to teach - for putting me up, for organising the reading and radio interview - and for being a general good egg and brilliant company!

Added: Writer 1 has sent me this lovely feedback:


I participated in Vanessa’s workshop as writer 1. Thanks to Vanessa’s help my thoughts are clearer now and I have a better idea of what I want to write and how I’m going to do it. I enjoyed the workshop immensely as we all got the opportunity to share our ideas and doubts. Furthermore, we received precious feedback and advice from Vanessa and our fellow writers. Thanks a million for your encouragement and support, Vanessa, and for giving us such a wonderful time!