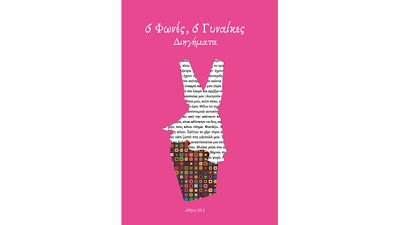 This is the cover of the Six Women Six Voices anthology, introduced here...

Thanks to Konstantinos Tsikas, there is an interview with self on Athens Voice - here.
Unless you can read Greek, it will not mean much - but I kept a copy in English. Here you go.

KT: How did this project come about? How were you contacted to participate in this anthology?

VG: It was, as I understand it, a collaboration between EUNIC Greece and The General Secretariat for Gender Equality, Greek Ministry of the Interior. There was a tight timescale, ony a few weeks to find writers and for the writers to produce a story. I was contacted by a colleague who works for the British Council, who knew I had published a couple of collections of shorts.

VG: Well, I guess you and I first met, if that is the right word, in the One World project, where we both, together with writers from many countries, explored what we wished in a story - and New Internationalist published the result. That was only a very loose ‘theme’. I have contributed to a few anthologies with themes - one coming up this year is a collection of stories written to be read out loud, whether whispered, shouted or some other way! (“Overheard” will be published by Salt, in November.)
I have not particpated in any other projects on the theme of women/gender, at all. That was one of the reasons why I wanted to do this one. It was a challenge.
Salt Modern Fiction published my own themed collection - ‘Storm Warning, Echoes of Conflict’, explores the after effects of war for those who fought, and those caught up, on the sidelines.

KT: Were you nervous that the “woman” theme of this anthology might end up producing polemical or “political correct” fiction?

VG: Yes. And in the end, I think that would have been to lay ourselves open to criticism. The job of the writer, as I see it, is not to be didactic, but rather it is to lay the topic in front of the reader in an engaging and original way - to draw the reader in so they can explore their own views alongside the situation portrayed. Besides, a state of affairs that has developed over centuries can’t be genuinely swept away in five minutes.

KT:Are you satisfied by how female voices and experiences are portrayed by both men and women writers in contemporary fiction?

VG: I can’t answer this question - I am not sufficiently well read in comtemporary fiction that deals with the female experience. Why? Because I am a living female. I read to escape the actuality of everyday life, not to look in a mirror.

KT: You mentioned in your speech that major newspapers in USA and UK are biased against books written by women, often overlooking them in favour of books written by men. Do you think this reflects a general bias against women writers?

VG: I quoted statistics from VIDA. Whether there is a conscious bias, I do not know, but the figures show an imbalance. Perhaps I am guity of an imbalance as well. On the plane journeys to and from Athens, I read two books: ‘The Fall’ by William Golding, and a biography of Ernast Shackleton. I then wrote some of my own novel - so was engaged in my own work - as a woman writer. Does that redress the situation? Probably not. My main characters are males. Oh dear. But I would hope we never have a situation where writers are told what they must write - there lie dragons!

KT: You are rapidly becoming one of the most notable writers in UK, especially after the success of your novel “The Coward’s Tale”. Has this exerted any pressure on you?

VG: I think that might be overstating the case! ‘The Coward’s Tale’ is swimming about nicely in the maelstrom - and I am enjoying the ride. But whereas Athens invited me to come across and speak, and whereas I am teaching a week-long fiction workshop in Ireland in June, and whereas I spent a glorious stint in Stockholm as writer in residence a couple of years back - I have had not a single invite to a mainstream literary festival in the UK this year. Go figure. The reality is, festivals are businesses - they are there to make money, and the punters who will pay to attend a talk by famous names who go from festival to festival, they will not pay to hear an unknown. Fact.

KT: These are rather hard times for Greece and Europe in general. Do you think collaborations from European writers, such as the present anthology, might help forge a renewed sense of European identity and solidarity?

VG: I really hope so. Maybe less of the European, perhaps - just as citizens who share the same troubled earth for a year or two. I would like to think that boundaries become less meaningful when there is trouble. Although they are so often the cause of the strife in the first place.

KT: Any fascinating books you read lately and might recommend to our readers?

VG: Well, I love all William Golding’s books. ‘The Fall’, ‘The Inheritors’, ‘Pincher Martin’, ‘The Spire’ - and his best known one, but the one he thought was his weakest - ‘The Lord of the Flies’.
I’d also like to recommend a short story collection or two: ‘The White Road and Other Stories’ by Tania Hershman, ‘The Temple of Air’, by Patricia McNair.
And later this year, a novel called ‘A Lady Cyclist’s Guide to Kashgar’ by Suzanne Joinson, is being published by Bloomsbury. I have been fortunate enough to read an advance copy. It really is wonderful.

KT: Was this your first time in Greece? Have you had any prior experience with Greek literature, writers etc.?

VG: It was my first time on the Greek mainland. Like many, I have visited a couple of the larger islands, Corfu and Crete. Crete I enjoyed particularly, for its history, its dramatic scenery, and the warmth of its people, although I fear Knossos was not treated particularly well by Evans - silly man. I gather that Rea Galanaki’s story in the Six Writers anthology was a reversal of the myth of Araidne. I am very sad that I can’t read it! (The anthology is only in Greek). You, Kostas, are the only Greek writer I have read. Who else would you recommend to me?

KT: Will we see your work translated to Greek anytime soon? Fingers crossed!

VG: I don’t know. It would be great to see ‘The Coward’s Tale’ out there in lots of languages - but the prose is very lyrical in places, and it mirrors a south Wales dialect. I guess that is not easy to translate. Fingers crossed indeed.

Thank you Kostas, I have enjoyed answering these questions!
Posted by Vanessa Gebbie at 08:57