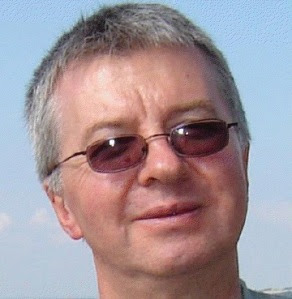 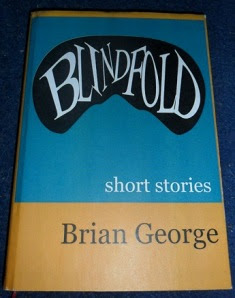 It is my pleasure to welcome a Welsh writer who is also a friend and writing colleague, Brian George, to me 'umblest of blogs. Brian's second collection, 'Blindfold' was published a few months back by Stonebridge Publications. This is Brian's second collection with them, and I must say their books are rather lovely - each is finished by hand, and has a ribbon bookmark - and comes with the guarantee that should anything untoward happen to damage the artefact - they will repair it until it is good as new. How's that for flying in the face of the soullessness of the e-book?

I had a nice time nattering to Brian about Blindfold - and I started by asking him to compare himself as a writer now with the writer he was on the publication of his first collection.

VG: Tell me how you think your work has changed since 'Labyrinth'.

BG: There are a couple of obvious things, I suppose. Most of the stories in Walking the Labyrinth were set in the south Wales valleys, and many of them explored issues around Welsh identity and culture. Only a few of the stories in Blindfold have valleys settings – though some of them are set in Cardiff – and there’s less of an attempt to explore those issues specific to post-industrial south Wales, for want of a better phrase. Many of the stories in this new collection are set elsewhere, or often have non-specific, sometimes vaguely surreal, settings. I’m really not sure why that should be the case, to be honest. Perhaps I felt I’d worked through some of those specific cultural issues in the previous collection, though it certainly wasn’t a conscious decision.
Another obvious difference is that most of the pieces are much shorter. I won’t say too much more about that here, as I know you’ve got a specific question about flash fiction coming up later!
More broadly, and linked to both these things, I’ve been trying to achieve greater compression, to cut away all but the most essential details and reduce each story to its fundamental core. Out with explanation and too much back story, that was my motto, I suppose!

BG: In some ways my methods of working have changed. Being lucky enough to participate in the Fiction Workhouse and the Fiction Forge (two wonderful online writers’ groups) over the last five years opened my eyes to new ways of working. I learned to work from prompts, to experiment and ‘let go’ a bit more in the initial act of writing, and then to radically prune and rework what transpired from that kind of exercise.
In other ways, though, I still work in the same way. There has to be some kind of itch, something that haunts me as a writer, something that these techniques of writing help me connect with. Inevitably, I suppose, some of these itches and hauntings change over time, while others remain constant.

VG:What is the broader significance of the title of this collection?

BG: Blindfold is the title of one of the stories, and on the surface it’s about a childhood game the two brothers in the story used to play, and which has now been adapted to help the damaged younger brother cope with an unbearable situation, to shut out a reality he can no longer face. In the context of that particular story, the ‘blindfolding’ can also be seen as a metaphor for the way the whole country was hoodwinked into supporting wars and military adventures in the recent past.
More widely, one writing colleague who has read the collection suggested it might be a metaphor for the way most of us muddle our way – with no particular sense of direction – through life. That wasn’t necessarily my conscious intention, but if that’s the way it strikes an intelligent reader, I’m happy to go along with that interpretation. Perhaps fiction – reading it and writing it – is ambivalent in that respect. It can enable us to see things more clearly on the one hand – to cut through all the stuff that obscures and gets in the way of understanding – but can also itself be a source of deception and self-deception. The phrase ‘telling stories’ can have all sorts of contradictory meanings.

VG: Many of the pieces of work are flash fiction. What is your definition of flash fiction, and what might be some good tips for writers who are new to it as a form?

BG: It’s very tricky to define flash fiction. I think if you put ten practitioners of the form in a room, you’d end up with twenty different definitions by the end of the discussion. At its simplest, it’s just very short fiction. People will squabble about how short that means, but for me, if it’s under a thousand words, you could call it flash fiction. Quite a lot of the pieces in Blindfold, though, are much shorter than that.
More important than the actual word count is the approach the writer adopts to telling a story. Very often in longer fiction, a writer takes pains to explain things – this happened, so then that had to happen; she did such-and-such because of so-and-so; oh, I should mention what happened to him five years ago, because that’ll help to explain why he’s now so wary of emotional commitment; and so on. Well, in flash fiction, you can’t do any of that. No explanation – that’s my one and only mantra! Strange things happen in flash. People act illogically. We see people from unusual and baffling angles, or we see them in fragments. Then, of course, the reader has to piece the fragments together. For this reason, some readers feel unsettled by flash.
At its best, though, this can all make for an extraordinary intensity – a real sense of cutting to the core of what a character, a situation, or life in general, is all about. The term ‘flash’ doesn’t just imply something that’s over in an instant, but also the experience of an extremely bright light being shone for that instant on something significant. The best flash fiction can do that, and can haunt you for years. If this is combined with a fastidious attention to language, a sort of poetic compression and allusiveness, then the results can be overwhelming. As you know, I’m always banging on about some of the short pieces by Jayne Anne Phillips, such as Under the Boardwalk or Solo Dancer, as examples that have stayed with me for years, or decades even, now.
The other thing I like about working with flash is that you can experiment with form in a way that can be very difficult in longer pieces.

VG: Tell me about Fibonacci sonnets.

BG: Well, this was one of the experiments in form I tried out in this book. I think the Fibonacci sonnet was ‘invented’ by an American writer of flash, Bruce Holland Rogers. Though it’s called a sonnet, it’s actually a prose form. The idea is that each sentence in the story has a prearranged number of words, following the Fibonacci sequence of numbers. You start with two sentences of a single word each, then gradually increase the length of sentences, before falling back in the same sequence in reverse order, and ending with two more single-word sentences. According to Rogers, this gives the piece roughly the same sort of balance as a Petrarchan sonnet!
Now, this may well sound like an abstruse and pointless exercise, like putting on a straitjacket, but what I actually found was the reverse. The underlying material of the piece I was writing was so raw and visceral that I found imposing a strict format like this on it – giving it a ‘cage’, if you like - controlled and intensified the emotional content. I’m not sure I’d want to write habitually within this kind of format, but I hope it worked in this particular instance.
And this is one of the beauties of flash fiction: it enables you to try out a great variety of voice and form.

VG: Nothing's ever perfect. If you could change one thing about the book, what would it be?

BG: Well, I often look back at individual stories, even after they’ve been published, and think I should have done this or that, this scene should have been expanded, that one left out altogether, that adjective should definitely not be there, you know the kind of thing! I wanted to make little adjustments to stories even as I was reading them out at the book launch, to be honest.
In terms of the collection as a whole, while it’s not a ‘themed collection’ in the way that’s usually understood – one consistent setting, recurring characters, and so on – there are lots of connections between the stories, some obvious, others more obscure. When I was discussing the running order of the stories in the book with Mike Byrne, the publisher, we decided not to signpost these connections too heavy-handedly, but to allow the reader to make the connections themselves. On reflection, I think we could perhaps have given a few more clues through the way we juxtaposed some of the stories.
Though there is certainly a lot to be said for getting the reader to do a bit of work!

VG: I have a copy to give away as a prize - can you think of a question to ask readers, and you choose the best reply, perhaps?

BG: What’s the best flash you’ve ever read? Explain what it means to you in no more than a hundred words.

There you go dear reader-person! Tell us about the best flash you've ever read - here. Maybe, if it was online, you could leave a link. Look forward! And finally, if you would like to order a copy of this book (highly, highly recommended) please email Brian George on briangeorge711 AT btinternet DOT com or Stonebridge Publications on anni AT wiltonjones DOT fsnet.co.uk.
Posted by Vanessa Gebbie at 00:34