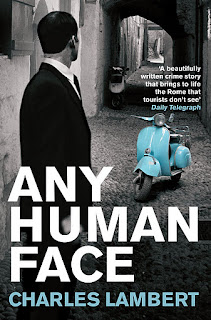 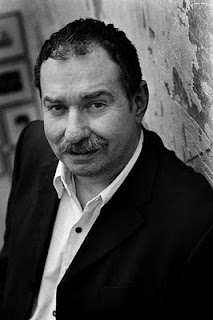 VG: Hi Charles - I so enjoyed 'Any Human Face'. It is lovely to be able to natter to you here to celebrate in a small way the publication of the paperback! So. Can you tell me about that title, first of all... where does it come from?

CL: I’d already written the first few chapters when I came across this phrase in Marilynne Robinson’s 'Gilead' –

Any human face is a claim on you, because you can’t help but understand the singularity of it, the courage and loneliness of it.

I knew at once that I’d found the novel’s epigraph and title. Any is an ambiguous word in a way – it’s almost an antagonym in that it conveys a sense of what unites us and what distinguishes us – it’s singular, questioning and yet universal. At that point, the (very much) working title was 'Mug Shots', in reference to the exhibition of police photographs at the centre of the novel, but I knew that wasn’t what I wanted; if nothing else, the tone was entirely wrong.

VG: Yes - although it would have worked - it really jars! Too simplistic, perhaps, when the novel is anything but. It is quite complex. You do have to keep your wits about you, I find -all the different threads interweaving.

CL: By the time I read 'Gilead' (which I loved, by the way) I already had the three main narrative threads – based on Andrew, middle-aged bookseller, Alex, aspiring rent-boy, and the Girl – I was looking for something that would bring them together in a non-narrative way, and what Robinson was saying fitted perfectly. I was particularly attracted to the way she placed courage and loneliness side by side, as though they were two aspects of the same thing, because that was where the book was heading. I felt that I’d found corroboration.

VG: …Aha. isn't it a magical thing when a writer we may never meet in person seems to hold out a hand and shake the one that holds our writer's pen? As we've been discussing behind the scenes, this recurrent thread of loneliness that crops up again and again - that certainly seemed a very important theme. Was that deliberate - or was it something that emerged as you wrote? Looking back, was it always running beneath the surface layers?

CL: Yes, loneliness is certainly an issue in the book, and it’s something I absolutely hadn’t planned. I’d thought the heart of the book would be impotence in the face of mysterious, indifferent power structures (which is what I always seem to come back to!) But the more I wrote – and learnt - about Andrew the more his isolation seemed to be central to his understanding of the world. I’m lucky enough not to have experienced much loneliness these past few decades, and my memories of the kind of crushing, annihilating – and thank God, transient – loneliness I suffered as a teenager and in my twenties – a loneliness I remember now with a kind of shocked wonder – didn’t really help me with Andrew (although they did with Alex).

What interested me about Andrew’s life was the way being alone can simply happen, and bring with it a sort of resignation that damps everything down; the state of his flat is a case in point, as is the (I hope) rather poignant episode of internet sex, interrupted by the arrival of the stray cat. What I didn’t want to do, though, was give the impression that being gay necessarily leads to loneliness, any more than selling books for a living does, or living in Rome. It was important to me that Andrew, despite his passivity, be given a way out of his loneliness, so the way the novel ends didn’t just meet a narrative need by tying up loose ends; it made emotional sense as well. In a sense it brought loneliness and courage together just as the epigraph does.

Alex (by this time Sandro) also knows what it’s like to be alone, loveless, and in a foreign city, and there’s a sense of loss about the book that isn’t just to do with the fact that the first chapter ends with a murder. As the novel develops, there’s a death – and resurrection – of the spirit, if that isn’t too grand a term. I hope the feeling the book leaves in the reader isn’t of hopelessness, because that isn’t at all what I want and it wouldn’t do justice to Robinson’s epigraph. I like to think that courage can be rewarded, although it isn’t always, and that Alex/Sandro is as resourceful as I would like to be in his situation.

VG: I certainly didn't feel 'hopeless' at the end. The ending came as a shock - and I won't give it away (!) - but the overriding feeling is 'its the journey that matters, not always the end of the journey..' if that isn't too airy fairy. Much of the book is colourful, tantalising...and you take that with you at the end. Life is like that, I guess.

CL: I also found myself wanting the Birdman, a character who played a much more substantial part than I’d originally intended (although he also plays a central role in a still unpublished novel of mine, entitled The Apprentice, and set in a considerably darker Rome than the one in Any Human Face), to represent the sort of gregarious and accommodating affection I’ve found in parts of the gay world. He’s a mother hen, clucking over his chicks and meeting their needs, albeit in a fairly seedy way, and it’s only right that his affection be reciprocated.

VG: I loved the character of the Birdman - an immensely engaging figure, seedy or not. Hugely generous in so many ways, and something of an innocent - I liked the way he sits where several characters intersect. And yet, he is also isolated - maybe that is pointed up y the birds - I don't know. It's just what I felt. There are so many types of isolation in this story...culminating of course in the darkest - that of the Girl.

CL: The isolation of the Girl is of a different kind. It has nothing to do with loneliness and everything to do with the deliberate privation of freedom, and it’s mirrored in Andrew’s predicament in the second half of the novel. I don’t want to say too much about this for obvious reasons, but the tensions set up between a solitude that’s self-willed or, at least, self-created and one that’s imposed from without are the driving force behind the novel, and the point at which the personal and political, for want of a better word, meet.

VG: Reading 'Any Human Face' was a powerful experience. It transported me not only to the underbelly of a city I know only very slightly - but also across time, opening windows onto the lives of characters who I still think about, even though I read the book some months back. There are so many questions posed, and half-answered - especially questions surrounding the central images, portraits, photographs whose origin is suspect. I found myself pondering - who 'owns' ones face? One seen, once photographed - does our likeness belong elsewhere as well as to us? And it has echoes of ancient concerns about the soul somehow being damaged if an image of a face is taken...

.I'll stop nattering to myself! Charles, thank you so much for chatting, and for writing AHF. I do hope we are lucky enough to see the next novel in line before too long...

Buy the paperback 'Any Human Face' - now available on Amazon!
and
Follow Charles Lambert on his blog, HERE.
Posted by Vanessa Gebbie at 06:22