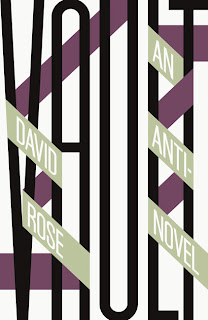 A while back, Salt Publishing kindly send me a pre-publication copy of ‘Vault’ to read for comment and review. I started it and enjoyed it – but life kept getting in the way more than once or twice - as those who have followed the goings on in my life (version 2011) will know. ‘Vault’ has been sitting patiently on my desk, waiting for me to read it again this time with no interruptions – and with many apologies to both David Rose and to Salt, finally, yippee!

‘Vault’, published earlier this year by Salt under its Modern Fiction wing, edited by Nicholas Royle, is an anti-novel. What IS an anti-novel? Was this a clever device intended to catch the eye, or was it really something working against what we expect when we read a novel? I think that yes, on one level it really is an anti-novel. It works like this. The main character of this novel, (for it is one, and a clever one) steps out of the realm of fiction, clothes himself in fact, and thus clothed, peers back into the unfolding narrative as the facts of his life are shaken and embroidered by the novelist. What novelist? Not this one – not David Rose – but another character, a novelist we never meet, a novelist who is repeatedly taken to task by the ‘real’ main character for playing fast and loose with a life that needs no embroidering.
Sounds complex – no, not really. It is logical, there is a pleasing pattern to the pieces which reel out like something dancing round inside a zoetrope. Or, to use yet another analogy, it is a Moebius strip of a novel. Whatever image I use, it is a novel I much enjoyed, as much for its originality as for its prose, its balance, and of course, the story that underpins the whole.

David Rose has carved out a reputation as a gifted writer of short fiction, and it struck me more than once that those skills were strongly at play in “Vault”. The work is short and to the point, but it is also complex, and the reader does need to work to make their way through the maze. I like that! I must admit, though, had I not been helped by the description of the book on the back cover, I might have got a tad lost, and had to retrace my steps.
So, basically –
The main character is a cyclist who becomes a wartime sniper, then returns after the war to dispense aid and occasionally retribution. He then becomes a somewhat unwilling post-war nuclear spy, seems to me. Perfect material for a novel indeed, and sure enough, the novel is there, or sections thereof. Only he does not approve of the way his experiences have been embroidered, and cheapened, as his life has been turned from actual to fiction. So we have a pattern of ‘memoir’ then fiction – which switches to fiction then comment via memoir. The voices are distinct. The ‘novel’ sections are a little more 'writerly', as the unseen novelist stretches to make the events seem more exciting, more colourful. The voice of the memoir sections (for want of a better word) is flatter, factual. It is extremely easy to forget that one is, in fact reading a novel with a novel within it...hence the Moebius strip analogy – which probably does not hold water – but what’s wrong with a good jumble of ill-at-ease mixed metaphors when describing ‘Vault’, which does not lend itself to simple description?!

I am very glad I read this book. It is a very clever, very interesting, original short novel, which rewards a close read in spades. I can recommend!

You can read the first four sections here on the Salt website. You can buy it from the same place, and all the usual suspects online.

-----
Added: I have been nattering with David Rose since posting this review - and was fascinated by some of the info in one of his messages - so with permission, as this adds hugely to the overview of the book and refers to one of my own best inspirations, W G Sebald :

I haven't reread Vault since I wrote it, nearly 10 years ago, except to proofread, as I hate rereading my own work, so I forget sometimes that it may be more challenging than was intended; several people told me they read it twice, which may be worrying.
The initial idea was based on fact, i.e. someone responding to a novel of their life - you may remember it: the woman who claimed that W.G. Sebald had used her lifestory for his novel Austerlitz, which he admitted to.
That's all I had to work with - the unease at one's life, and more importantly, one's death being appropriated. The plot was constructed as I went along. I have done a fair bit of cycling, so decided to use that for authenticity, although the pre-war history needed research. As did all the rest - sniping, the battles scenes, the post-war CND marches, which I just remember...
I gather a lot more elements got mixed in as I wrote, the density accumulating in the writing act, which I am sure you have experienced, especially in your new novel.