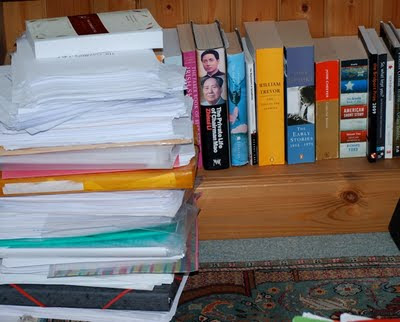 There is such an interesting, very useful, three-part discussion about revision, rewriting, self-editing - call it what you will, on Tania's blog. Many different writers, all saying how they approach this subject. True, it is directed at short fiction - but so much is relevant to longer pieces of work. Inasmuch as my own current work is reaching the end of its preparation process, and inasmuch as it started life as a series of discreet sections, I chime with much of what is said in these discussions - I share many of the processes described.
Here are the links - the posts and subsequent comments are very valuable.
Part I (also available as a PDF)
Part II (Also available as a PDF)
PART IIb
But there are some differences, of course, as there always will be where a group of writers share their processes. In working on each of the separate pieces between late 2006 and early 2010, I started after a while to do a lot of editing as I went, revisiting the work of the day before and seeing things I didn't like, changing them until it felt better... and using those pages as a jump-off point to continue with that day's writing. And I'd often stop, go back over a paragraph, a few lines of dialogue, shake my head and change them. It became a physical process. I could FEEL when the train was leaving the rails - ie its own rails, and being pushed by the writer. That's when I stopped and rewrote.
It was a very different process to writing a stand alone short story, for this writer. When I started 'The Coward' I was a writer who staunchly believed in writing a first draft right through before looking at any of it with a view to revision, as that's how most of my shorter pieces were approached. With some notable exceptions of course...but in the process of this work I changed completely! And, I believe, I saved myself a lot of time - but perhaps that's a different issue? Perhaps the end result would have been the same. 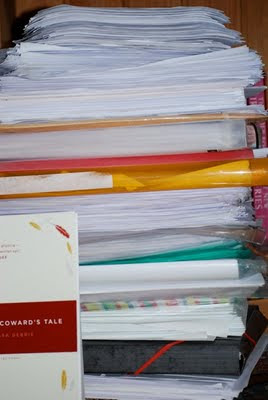 This pic? The stages of revision of the whole manuscript, AFTER the first draft of the novel was completed. Starting in March 2010, finishing in Oct 2010 -re-creation of one character, then plot tweaks, and the all-important structural revision, where I needed to see the whole thing in one spyglass, over and over and over. Then the revisions became smaller, then tinier, a word here a word there...read through for sound - working towards a cleaner and cleaner product. Because that's what it became. Emotion left the room, and only the words mattered. Getting them right. The top few layers are Bloomsbury-led, tweaks and copyediting proofs. The final layer is the uncorrected proof pages recieved last week- and the uncorrected proof book itself, all ready to go out! Very exciting.
It's a salutary thing though. My manuscript was c 250 pages in length. It didn't vary much. The finished book is 380 pages - 130 pages longer - maybe due to different typeface, less lines to a page... ! Even though I feel horror at my use of precious paper in revising here -I don't know how else I might have done it - and I console myself that the pile could have been a lot higher.
Posted by Vanessa Gebbie at 02:48