2014 round up, with special mentions.

From March onwards, 2014 was always going to be on the slow side writing-wise thanks to The Other Half becoming a High Sheriff - a great honour, but something which was going to impinge on our lives for a twelvemonth.

Poetry seems to have taken a front seat, no matter how much I tried to ask it to move the back of the room.  Here then, a month by month look at the "quiet" year that was 2014... 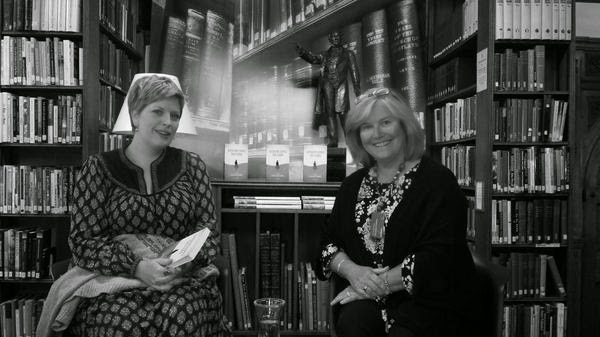 One of the joys of this writing stuff is being in the company of others on the same but different journey. (They will know what I mean!)

Andrew Marshall, hugely valued writing buddy, whose career spans so many facets. And Gail Louw, playwright extraordinaire and member of the same writing group - whose plays are now hitting the stage all over the place - UK, South Africa, USA. Amazing people both.

Poetry buddy Caroline Davies, whose steady incisive feedback has been so valuable too, and with whom I’ve had such fun and interesting times this year, tracking down war memorials, among other things.

Sarah Hilary, the hardest working, most tenacious writer, whose debut thriller, “Someone Else’s Skin” has just been an amazing star, and it’s going to be on telly and everything! http://www.amazon.co.uk/Someone-Elses-Skin-Marnie-Rome/dp/1472207688 Sarah visited the blog here:

Sarah Perry, whose debut “After me comes the Flood” from Serpent's Tail is simply wonderful, storywise and writingwise. I was so glad to endorse it with a cover quote and then to interview her at Gladfest this year.  (see above) http://www.amazon.co.uk/After-Comes-Flood-Sarah-Perry/dp/1846689457

Sylvia Petter, the whizziest person I know,  and a fantastic writer, who organised the Thirteenth Conference on the Short Story (see July) with such aplomb, and whose company is absolutely magical, a stream of endless interest.

Tania Hershman and her co-writer Courttia Newland,  whose terrific text book on writing the short story has just been published by Bloomsbury -http://bloomsbury.com/uk/writing-short-stories-9781408130803/

Sue Guiney, whose writing has led her down very inspirational paths. Her work among the young people of Cambodia is seriously changing lives : www.sueguiney.com . Sue is the founder of Writing Through Cambodia, a program which uses the creative writing of poetry and short stories to develop English fluency, conceptual thinking and self-esteem for Cambodian students and teachers.

Lane Ashfeldt, whose short story collection Saltwater was published this year by Liberties Press. The collection contains  a few prizewinners among its twelve stories and a novella.  Lane runs a rather lovely bookish B and B in Knighton, if anyone enjoys walking, writing, mulling. http://ashfeldt.com/shop/

Sarah Salway, who not only makes me giggle, but who (via Cultured Llama) published the most beautiful book I’ve read this year: Digging up Paradise http://www.amazon.co.uk/Digging-Up-Paradise-Potatoes-England/dp/0992648564

Clare Best and Catherine Smith, who, with the above-mentioned, made up the best company for a nutty foursome weekend writing retreat - and I do hope we do it again!

Here's to a Happy New Year!