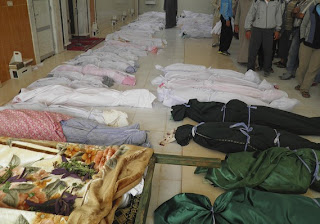 ‘How much blood must we pay before the world helps?’ - Abu Suhaib, a Syrian hospitalised in Jordan
#TippingPoint There is a dreadful feeling of helplessness, seeing the increasing atrocities perpetrated by the Assad regime reported in the press, culminating in the indescribable news last Friday that young children had been the target - toddlers bound and killed in front of their parents before the parents were massacred in their turn.
Of course, they wanted world publicity for this - to act as a deterrent, one supposes, against further insurrection.  But enough is surely enough?
Today, on blogs and on Twitter,  people using the internet to express their horror at these events, and calling for the killing to stop - spreading the word in a small way.  This is my contribution to #tippingpoint
What can you do? You can leave a post on Twitter, or facebook, in support of #tippingpoint. You can do a blog post. You can sign a petition to demand action against those who attack  civilians, and children in particular - such as that organised by Save the Children.
Save the Children - Stop the Killing -  Petition
Posted by Vanessa Gebbie at 02:24

Email ThisBlogThis!Share to TwitterShare to FacebookShare to Pinterest
Labels: #tippingpoint, Save the Children, Syria