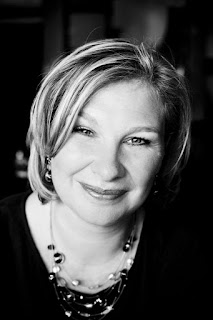 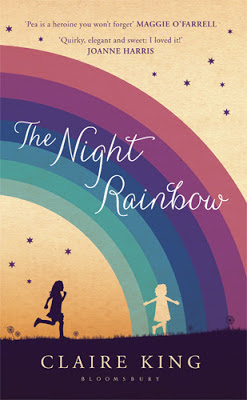 I am delighted to welcome the lovely Claire King to the blog today, together with her fabulous, enchanting debut novel, The Night Rainbow, out from Bloomsbury very soon, but shipping already - so if you’ve got it, or are reading it, and want to leave Claire a message - leave it here.
Claire has just arrived in the UK from France with the family for the launch celebrations, and I am wishing her every joy as her  baby goes off into the world. It's a funny old feeling. I can't get to the party myself, as I'm off on a writing retreat :( - so I'm relying on others to post lots of photos, and make me feel thoroughly jealous.

Now - so often, these bloggy things end up asking the same old same old - so I asked Claire to start the discussion - what would she most want to natter about?

Claire King: A number of book reviewers who have read The Night Rainbow have told me that they although they loved the book, they are perplexed at how to write a review about it...

VG:( I understand that one, believe you me!)

CK: I also found it hard, when replying to 'What's your book about?' to find ways of answering the question without spoiling the role the reader plays in engaging with the story.
So, as someone who has read The Night Rainbow: What would you say are the main themes of this book?

VG: Right - my first reaction to that one is this - first and foremost The Night Rainbow is a bloody good story, with wonderful characters, and reading the novel was a unique experience. I had not read anything quite like it before. To talk in terms of ‘what are the main themes of the book’ reduces it to a lesson, a message - and when I was reading, I was so transported I lost any sense of what the writer’s intentions might have been.
So with hindsight - and with the caveat that ‘theme-discussion’ should not be taken as an indication that this is anything but a great read - and also in the knowledge that we will all find something different, it is such a rich book, deceptively so - the themes are strong.  Firstly, it explored our sometimes unexpected resilience in the face of difficulties, even at a very young age.  How children can hold great natural wisdom - they may not know how to articulate that wisdom necessarily, but that is no reason not to believe that children are much wiser than they are given credit for. How we all can do much more than we think - I love that! And I’m sure there are other things too - the whole explores the way the parent-child relationship can be turned on its head - even though the children are very young. And the overarching theme, coming to terms with loss, is a classic. Jeez, there is so much there...

CK: Can you say anything about how your own viewpoints and experiences influenced the way you read it?

VG: The chemistry between Pea and Margot is wonderful - for me it started a real reappraisal of how I was when I was a child, my family, my friendships, my relationships with the adults who then surrounded me. It was like meeting myself again, years later through both the girls, if that does not sound daft. I desperately wanted a sister as I was growing up, and never had one. A brother came along when I was three, but that isn’t the same thing, is it?
I was a very ‘thinking’ child - so much so that I would be told to stop thinking. I was also a lonely child. At times in The Night Rainbow, I found it almost unbearably poignant therefore, as the girls seek to find their place in a changed world.
And as for loss, I watched my mother crying by the Aga when I was two and a half, hiding under the kitchen table - her father had just died. She didn’t know I was there. So I heard all the adult talk - my father trying to comfort her - although he had just lost his father too, so it was a doubly ghastly time for them both. The small girl under the table understood then that everyone must die, that losing someone you love is ghastly, that my mother and father would die, and so would I. I have never forgotten that moment. So, as the book unfolded, the child in me, the child under the table, responded to the book. Does that make sense? I was seeing it all through a child’s eyes.

CK: Do you think the book cover and the trailer give the right message to potential readers about what they can expect?

VG: I think the trailer is a stronger indicator of what the reader will encounter.  It is lovely to hear the book's voice read so wonderfully. Who is reading? That is not to say the book cover is not beautiful, and very intriguing...and yes, once you’ve read the book, you understand the cover more. I’m going to stop there!

CK: The voice over is the daughter of someone who works at Bloomsbury in London. Her parents are French-Canadian, hence the lovely way she says 'Margot'!

VG: And here is that lovely trailer...enjoy.
Now, a question or two from me again... Did the idea come first, or did it unfold as you were writing?

CK: The idea didn't come first, well, not all of it. The novel started off a little like The Mosquito Coast, but more French, with a family who had moved into unfamiliar - and in some ways hostile - territory. But as the story grew the principal character emerged as the oldest girl, and I knew that the story was going to be hers. Then one day, while I was out with my husband, and my two girls - one toddling and one in a pram - in a nearby meadow, the youngest one almost had a terrible accident. Almost. And all I could think was, what if I hadn't been there? After that everything fell into place and I knew the story I wanted to tell. 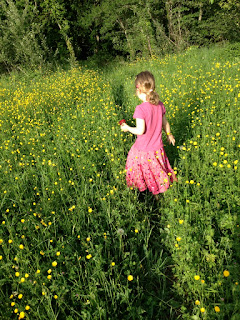 VG:  And that leads nicely onto something I’ve been dying to ask...Are the girls based at all on your own two gorgeous daughters?

CK: Are the girls based on my daughters? Ah it would be tempting to say yes, but it's much more complicated than that. I purposefully made a mood board for The Night Rainbow, with photos of landscapes and houses that are similar but not the same as those where we live. I also chose images of children who didn't look like my own, and I worked with those as guides. Otherwise the temptation to leave fiction and fall into anecdote may have been too great. But the voice of my children is all over the book. My eldest was four years old when I wrote the novel and my youngest two. They would say the most magical and wise things and I wrote them all down. Where I could, I wove them into Margot and Pea. 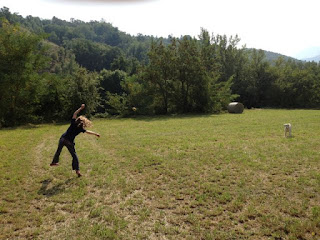 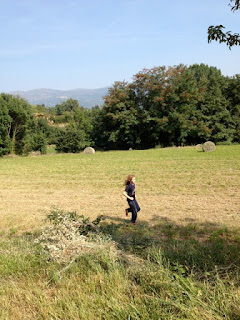 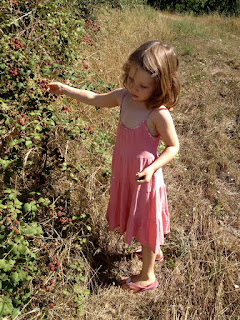 Because of their influence, and because I hardly describe the girls at all in the book, I was anxious to see how Margot and Pea would be portrayed on the book cover. When I saw Holly MacDonald's artwork I was quite taken aback. The silhouettes could easily be my girls. A strange and magical bonus. 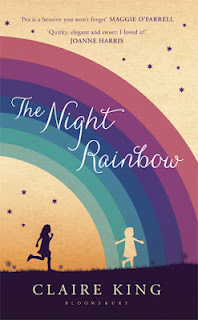 VG:  What a magical coincidence. Spooky stuff! But another question - on a serious note: How much did you want the novel to explore notions of non-belonging?

CK: I'd say I was interested in the idea of belonging (rather than non-belonging), in a broad sense of place, people or culture. The cause and effect of it. I noticed when my daughters were very young that they had an innate sense belonging everywhere, a casual intimacy with nature and with people. How we are transformed when that belief is taken from us...

VG: Claire, thank you. It has been a joy nattering for a minute or two about The Night Rainbow. It is going to do so very well - enjoy every minute!