Coming soonish - a visit from the author of 'Funderland'...

In the spirit of spreading the word... I want to talk about a writer called Nigel Jarrett, who I 'met' on Facebook.
Yes, I know, Facebook can be an utter waste of time. But occasionally it turns up good things. There is a group called The Welsh Short Story Network - I became a member suddenly, somehow - and that was nice. Interesting if spiky and oftentimes depressing debate occurs, in which I blunder about, putting my own point of view. No the short story market is not dead. Yes publishers are having a hard time selling them. We have to work hard too, don’t stop writing them, literary fiction is pretty dead, but it doesn’t mean we stop writing it, does it? What about these massive competitions suddenly? .... that sort of thing, guaranteed to attract a few snippy remarks. But debate is always A Good Thing, innit? 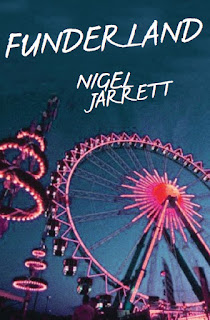 Anyhoo. One of said debaters was/is this writer called Nigel Jarrett. To my shame, I had not heard of him, or his collection Funderland, (Parthian). Well - I haven’t heard of a lot of writers - I’m no expert - but at one point, he listed the places his collection had been reviewed. The Guardian. The Independent. Hang on a minute. Why didn’t I know of this writer?  What had happened? I began to wonder what I was missing, whether he was hiding behind Offa's Dyke (now there's an image...) and ordered a copy.

Driving to the seaside together are a young girl on the verge of womanhood, her mother and her stepfather with his son. But this is no ordinary trip. There's something sinister about Evan Charlton and all too soon the girl is plunged into a nightmare world that she cannot understand.This debut collection of short stories by award-winning writer and journalist Nigel Jarrett brings together places of violence, longing, helplessness and vivid remembrance, where characters must cope with the darker side of human relationships inside the seemingly cosy world of the family.These stories explore romance with tragedy, family with madness and the lives of people with a warm and tender humour.

Here are extracts from the reviews - there are links on the web page below:

The Guardian
'...as a music critic by profession, Jarrett has a marvellous ear... And the stand-out story, 'Mrs Kuroda on Penyfan', is an enigmatic study of a Japanese woman's displacement in rural Wales.' Alfred Hickling

The Independent
'Nigel Jarrett's stories take seemingly ordinary or innocent situations and gently tease out their emotional complexity. Both 'Funderland' and 'A Point of Dishonour' confound expectations superbly...He's not afraid of unusual perspectives and his bravery is well rewarded in this unusual and sensitive collection.' Lesley McDowell

Planet Magazine
'Funderland, Nigel Jarrett's superb short story collection, demands the tribute of slow and careful reading [...] The revelation of these stories is the vast and subtle and inarticulate web that links and separates us all. Read them slowly, more than once, and learn.'

New Welsh Review
'Funderland is an excellent first offering, giving a thought provoking series of wry, often wistful fresh angles on the fragility of relationships. Readers will want more, anticipating the emergence of a strong, telling voice in fiction from Wales.' Robert Walton

Now Robert Walton’s name I recognise - he was kind enough to review The Coward’s Tale for New Welsh Review too - with its US cover, somehow: http://www.newwelshreview.com/article.php?id=331
Funderland sounds like sounds something I will enjoy hugely. I’m waiting for this collection to arrive - and have invited Nigel Jarrett to talk about his work here, as and when. I'm afraid it will be more 'when' than 'as' - for a Hawthornden month will intervene - but there’s something nice for me and my reader to look forward to. I may bring you others from this network in due course.
Meanwhile...here is Funderland on Parthian’s website. http://www.parthianbooks.com/content/funderland
and of course all good bookshops will be able to order a copy for you.


I was going to end with a eulogy to The Short Review http://thenewshortreview.wordpress.com/reviews/-  run by the lovely Tania Hershman, and dedicated to reviews of short story collections and nothing else - and I see that its hiatus might be coming to a close... yippee!