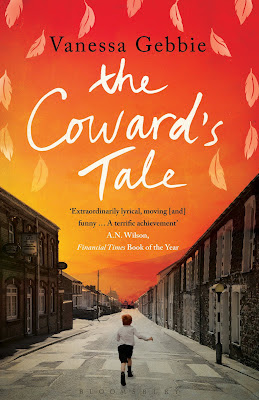 It is publication day of the UK paperback for 'The Coward's Tale', and it is the start of a long celebration. It's been a long journey too, and this is some sort of journey's end, so let's raise a glass to lots of hard work and a little luck along the way.
Friends both old and new have been very kind and offered to help the party along - so let's start the life of the paperback with a visit today to three fab blogs, to kick-start an online tour.
CLAIRE KING, whose own debut novel 'The Night Rainbow'comes out with Bloomsbury next February: Claire has persuaded the lovely Tram-Anh Doan, Paperback Editor for Bloomsbury, to join us in a natter about the process of paperback publication. And we have a very unusual treat - a chance to look at the rejected cover images for the book, and find out what I thought of them, (I hadn't seen them before...!).
TANIA HERSHMAN whose forthcoming flash fiction collection has everyone on the edge of their seats in anticipation... She asked me A Question of Place. Where does the writer live - and does that impinge on what she writes?
SARA CROWLEY Talented short story writer, novelist in the making, bookseller and certainly candidate for the most superb Mum on the planet. We talked about The writing of a ‘modern classic’. Dylan Thomas, David Jones, toffees, and tea with Obama.

Also, the entertainment doesn't stop there!

It is 2012, and it is Bloomsbury's Year of the Short Story. I'd like to join in - I'm far better known as a short story writer than a novelist, and anyway, 'The Coward's Tale' is all about the power of story to transform, heal, illuminate.  So - I was invited to record my favourite short story for the wonderful website Read me Something You Love.  And I did just that, aided and abetted by Steve Wasserman and his travelling recording studio - I read The Ledge, by Lawrence Sargeant Hall.  It is long, so he has edited it into two recordings, interspersed with natter and chat - but do take a chance - it really is something you'll not forget easily.