FOLLOWING IN THE FOOTSTEPS OF THE SWANSEA PALS

We picked up the trail of the Swansea Pals Battalion (14th Battalion, Welch Regiment) in the tiny village of Septenville - little more than three or four farms on a side road - where they were billeted on 1st July 1916. As we approached the village a male hen harrier rose from the furrows on our right, disturbed by the sound of the car. The old brick barns sat exactly as they were almost a century ago - it did not take much of a leap of the imagination to see the bricks a brighter red, the pointing clearer, and to see the battalion - the officers settling down to supper in the farmhouse, and other ranks eating supper in the farmyard- washing under the pump, arguing over the best corners in the barn. Taking the chance to write a letter home. 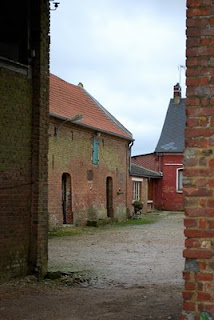 I spent five days in the excellent company of military historian Jeremy Banning, following the progress of the Swansea Pals Battalion through the battlefields of WWI. I wanted to literally go where they went, stand where they stood, see the roads they marched along to the front, see where they fell. 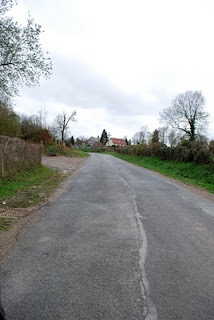 From Septenville to Rubembre. From Rubembre to Herissart...Franvillers on 3rd, Heilly... Heilly was the site of a large casualty clearing station, the wounded brought from the front by train, ambulance.... And up the rise is Heilly Station cemetery. Men were dying too fast for the gravediggers to keep up. Many graves are home to three bodies. I couldn't help wondering if the Pals saw, heard, smelled the chaos.
There was no rest for the Pals at Heilly. Orders came that the 38th Div would relieve the 7th, and on they went to Fricourt. The Citadel. 5th July, 6th July. On the 7th July they were in the support trenches here, the final training - and suffered the loss of four officers, accidentally wounded whilst practising the throwing of percussion bombs. I wonder if they also knew that those in charge higher up had been sent home, following the failure of the first wave of attacks here? 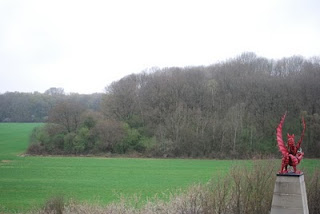 Their objective, and ours, was this irregular patch of woodland, this nearest section called the Hammerhead, and the stretch running away to the left. It was attacked by the Welsh over 7th to 12th July 1916 - but the attacks before the Pals got there had not been a success.
Jeremy and I stood on the ridge at Danzig Alley Cemetery, looking down on the village of Mametz, and the wood that bears the same name, over to our right in the gloaming. It was cold. The Swansea lads moved up to the front line, White Trench, on 8th July 1916. The attack was planned for the following day, as we ourselves would visit tomorrow. In the end, the attack was delayed by twenty four hours, and I can imagine the tension, as those who chanced a glimpse of the terrain looked across open ground to where it slipped away in a thirty foot 'cliff', down to the open wide space (now a series of open fields) they would have to cross to the trees, where the enemy was waiting.
This is from Wikipedia - inaccurate I think, plus ca change - I believe the fighting concentrated actually in the wood itself, but you get the idea:


The 10 July attack was on a larger scale than had been attempted earlier. Despite heavy casualties the fringe of the wood was soon reached and some bayonet fighting took place before the wood was entered and a number of German machine guns silenced. Fighting in the wood was fierce with the Germans giving ground stubbornly.
The 14th Welsh (Swansea) Battalion went into the attack with 676 men and after a day of hard fighting had lost almost 400 men killed or wounded before being relieved.

Today, the wood is privately owned, and there are man-traps deployed as it is used for hunting. We weren't meant to be there, and I was apprehensive - appropriately. We slipped and half-fell down the 30 ft 'cliff' from White Trench to the field, and after a few moments consolidation, walked fast straight ahead, taking care not to step on the crop. Reaching the edge of the wood, we did not go too far in.
There are many hundreds of bodies still in Mametz Wood, in two mass graves, according to those who know. Their names are on the Thiepval Memorial to the Missing.
This is from an account from Pte Sweeney, 1st Lincolnshire Regt.


"In Mametz Wood there are not hundreds of dead, but I should say thousands as it is very big. When we started attacking this wood the trees were so close as they possibly could be but you should see it now, you can see straight through it quite clearly."


Over the five days, we stood in many cemeteries now tended by the Commonwealth War Graves Commission, marvelling at their beauty, their peace. The endless stories, if you listen to the breeze in the willows, the names, dates, inscriptions. The brilliant white of endless headstones against the green of the turf - the flowers from our little islands. Aubretia, tulips, Christmas Roses, Daffodils. But no cemetery was as beautiful as Mametz Wood with its wood anemones and early bluebells. And, where German machine-gunners and snipers had hung from their ropes high in the trees, where the Pals got caught in a bombardment by our own artillery, and where there was carnage - the low mist lifted to show a sky reaching almost to the ground, glimpsed between new trees where the wood was narrowest, several generations on from their splintered ancestors, growing up from a carpet of stars.

One of the bodies never found is that of the young runner, Watcyn Griffith, Private 26402 17th Bn., Royal Welsh Fusiliers. He was the younger brother of Wyn Griffith who wrote ' Up To Mametz Wood'. We went to find his name, at Thiepval. 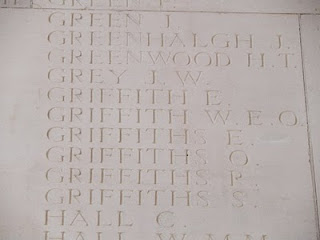 And we did. But he's there in the wood somewhere, with many of my Swansea Pals, who over the five days of my visit, I came to think of as 'my boys'. Is that daft? I doubt it. Most of them were younger than my own sons -and it felt good to be with them for a while.

.
.
*Mametz Wood by Christopher Williams is the property of Swansea University.
Posted by Vanessa Gebbie at 04:44